We arose Dec. 1, after a mere 12 hours sleep, and enjoyed a lavish breakfast buffet at Alexanderplatz Hotel.  I’m sure you are dying to know which Alexander the platz [plaza, pronounced “plots”] is named for.  Why, the very same Czar Alexander that has a bridge named after him in Paris and who met his end in Siberia.  Recall that we saw his tomb in St. Petersburg, where he and his family have at last come to rest.  Czar Alexander, Kaiser Wilhelm of Germany and King Edward VI of England were all first cousins, related through Queen Victoria of England.  The crowned heads of Europe were quite chummy in those days, though occasionally at war with one another.  Anyway, you can see Alexanderplatz in the movie “Bourne Supremacy”.  And let’s face it, “platz” is just fun to say.
We walked the short distance to Museum Island, crossing the Spree River [pronounced Shpray] on a footbridge.  This bridge is currently under construction and will soon be wide enough for cars, though we hope there will be plenty of walking space.  Bicyclists are quite aggressive in Berlin and, though they have designated pathways on the streets and wide sidewalks, they still attempt to run down the pedestrians.
As we approached the museum, we could hear changes being rung on the great bells of the Berlin Dom, aka Cathedral.  Though it is only about 100 years old, the bells are the real deal.  We could see the great bell ringing, once we got onto the portico of the Altes Museum.  The bells rang for at least 15 more minutes as we waited for the doors to open.  We asked God’s pardon as we entered the museum rather than the church.  Honestly, nothing makes me think about God more than art, ancient or modern.  The overwhelming majority of all art concerns God and his Wonders.
Ron had researched the different tickets available and come to the conclusion that it was the best deal to get the yearly pass for 20 museums; we knew we could get by cheaper, but they promised us that we could cut to the front of the lines [which worked except for one time].  We figured that was worth the €€ and felt it well worth making a contribution to the museums in any case.  So we had our photos made by a lady who simply could not understand why we had a US address and wanted these passes.  But once in hand, the passes saved us much valuable time, and time was at a premium this trip.
We had done our homework and knew what Berlin offered that we HAD to see, and it was a long list.  We had to cover at least one major museum a day, with precious little time for touring the city or shopping.  But since the museums were on short winter hours, we had time for those other things as well.
The great colonnaded front of the building used to face the Berlin Palace, which was destroyed and the East German government had a building on the site.  This in turn has been utterly destroyed and a lot of construction is underway.  The Museum Island guidebook says there are plans to rebuild the palace, but right now there is nothing there but the Humboldt X-Box building, which features a lightshow after dark.  And I guess a darkshow after light.
The Altes [Old, pronounced “al-tease”] Museum had no guidebook and no real theme either.  The museums have a strange history to begin with and were absolutely torn apart by WWII and the Soviet occupation.  The Nazis at least tried to get the major works into safe keeping, including stashing some in a salt mine.  The Soviets stole at lot of things during their tenure in Berlin; some of these have been returned, but not all.
The Altes was bombed extensively during WWII and the decision was made not to restore it; it had huge frescoes on the walls evoking the lands from which the displays came.  Also, the lands that the displays came from.  Some of these survive, some are fragmentary.  I especially enjoyed seeing the fresco of the great Ramses temple of Abu Simbel before it had been moved above the new waterline of Lake Nasser.
The Altes contains the majority of the Egyptian collection, classical Greek and Roman, and a good deal of Etruscan stuff, which is rare, as the Roman destroyed so much of it in their day.  It is remarkable how the history of art is the history of war.  The treasures emphasized in the Museum Island guidebook include

We are mad for Egyptian art, and the Altes has an amazing collection, including a few items we had never seen before, which is really saying something.  But before you get too excited, the famous bust of Nefertiti is not in the Altes with the rest of the Egyptian stuff, but is in the Neues Museum.  As noted, the museums have been rebuilding and sorting themselves out for 20 years and still have a ways to go.  After reunification, it has been the goal to bring all the goodies from what was West Berlin to Museum Island in what was East Berlin.  Trust when I say this has been a massive undertaking and it is amazing how well it has been done so far.  Anyway, stay tuned for Nefertiti.
The Altes houses the usual Greek painted pottery; a fine hoard of silver plates and dishes; an array of Greek, Roman, Etruscan and Persian armor and weapons; a simply stunning free-standing bronze boy, ca. 300 BC, from Rhodes.  There is also a glass [!] amphora [large bottle] with silver fittings that is the largest surviving glass object in the world, dating from 100 BC.  I’m estimating it is 20 inches tall.  And a bust of Hadrian, the traveling Emperor, whom we have seen in every museum we visit.  This time, there was also a bust of his wife.  As always, the beautiful, deified Antinous, Hadrian’s best buddy, stands nearby.  And this begs the question: Since Ron is an antenna engineer [though not deified] should his name be Antenna-us?
But the highlight, to us, of this museum is the bust of Cleopatra, made in her lifetime, which the museum has paired with a green greywacke bust of Julius Caesar, made just after his death.  The pair are displayed against a dramatic red background and he is set just behind her, so that his inlaid eyes gaze at her intently. 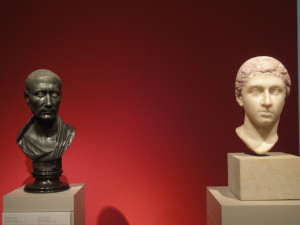 Utterly exhausted, we walked back to the hotel and fell into sleep for a couple of hours, rousing ourselves to get some dinner.  We found Happy Noodles and enjoyed some teriyaki chicken with rice.  Thus fortified, we went back to sleep.