Click your ruby slippers and you’ll be there!  Well, if you fly across the Atlantic, across Europe, over the Alps and southerly a bit.

We have visited Rome several times, but had never been to the Vatican.  The main reason is the crowds and craziness.  This trip, we determined to bite that bullet, guessing what to expect [based on our crowd experience of the Hermitage Museum in St. Petersburg, Russia].  We signed up for a bus tour offered by the ship; rather expensive, but we knew that [a] it’s a long way from Civitavecchia [chee-vee-ta-VECK-ya]  harbor into the city and [b] they’d get us back on time.  The also took us to lunch, as a group.

First off, we enjoyed the 1 ½ hour trip through wonderful, fruitful fields of sunflowers and field corn.  Old farm houses dot the landscape, many of them almost fortresses, built around a courtyard.  Wonderful umbrella pines crop up on the horizon; these are all over Rome and nothing makes me feel like we’re in Rome than these trees.  We came in on the major highway, which has traced the exact route for at least a thousand years.  It leads past the imposing basilica of St. Paul-Outside-the-Wall, the site of his execution and burial.  It is by no means the original building, so we haven’t made a point to go there, but I’d like to.

The basilica is indeed right outside the walls of Rome, which do not exist anymore, except for a section here and there.  There is a pyramid tomb embedded in the Roman wall.

Our Vatican tickets were for 1 pm, so we got a city tour first.  We have done this very tour at least twice, but it’s always fun; our biggest surprise was the extensive rebuilding of the Colosseum!  When we last saw it, in 2011 it was still very much a ruin, having served for centuries as a stone quarry and earthquake attractor.  They had re-built a section of  the performance floor, to show how it would have looked.  Now, they have edged the most prominent ruined wall with sturdy brick.  I assume the brick will support the rotten stone, yet be very clear what’s ancient and what’s not.  And, as the ancient Romans used a lot of brick with stone, it’s appropriate.

We all lunched on a side street, in a tiny restaurant clearly made to feed busloads of people quickly, but well.  No choice: salad, lasagna, red wine and trifle for dessert.  I thought it was charming and efficient, but many on our tour grumbled about it.

And on we went to see the Vatican.  I am of more than 2 minds about the Vatican.  First off, I was highly amused, remembering Pope Francis telling the US that we shouldn’t build a wall on our border, yet the Vatican is completely walled and guarded by soldiers.  You’ll read more of my minds below.

This tour was a taste, and only a tiny taste of what’s in the Vatican.  Our guide stressed those things she cared about and slid over the rest.  She spent ½ hour in the sun explaining what we were going to see in the Sistine Chapel, but failed to mention the smaller cycles of frescoes by Sandro Botticelli, lower on the walls.  She told us the categories of Greek statues, as delineated by Johan Winkelmann, but failed to point out the Apollo Belvidere, the most exquisite Roman copy of a Greek bronze [now lost] in the world.  She dragged us through a long chamber of hand-painted maps from the Renaissance, when the church was at the peak of its power—who cares?  All the while, it was wall-to-wall people, as desperate as we were to see the treasures.  Our guide fussed and fussed about keeping up. We had 10 minutes in the Sistine Chapel.  It was actually enough.  There were stern guards keeping people from stopping right in the doorway and pointing out the steps.  All around the wall, there was a bench and I was able to find a spot and just look from there, rather than wander around craning my neck.  [no photos allowed]

To say it is wonderful is the truth.  But I have never been that big of a fan of Michelangelo; I am not fond of the over-blown musculature of all the figures.   If there were simply the Creation of Adam, that would be enough.  The rest is gratuitous, IMO.  But, then, I’m not Pope Julius.

The restoration has been a wonderful success.  I have seen photos of the grimy, dingy state of the ceiling before the 1980-84 cleaning.  The vibrant colors are much more what I would expect of the early 1500s.

I do love Sandro Botticelli!  He was often a painter of mythology, such as his “Birth of Venus.”  So these side walls’ religious theme, exquisite and delightful, surprised me.  One wall holds the cycle of the story of Moses, the LAW, while the other, the cycle of the life of Jesus, the WORD.  Oh, how I wish I could have got closer!

Then we were trotted over to the basilica proper, where our guide did let us wander about a bit.  I spotted the old bronze statue of St. Peter, which is supposed to be right above his tomb in the catacombs below.  There was a short line to see it, and I went over.  I then realized people were humbly touching the feet of the statue and that so many pilgrims had done so, the both feet are worn half away.  This awed me; the thought of 1500 years of pilgrims, all in line, to pay homage to the simple fisherman whose faith brought the news of Christ to us all.  I touched his feet also, thinking about the time Jesus had washed his feet.  Peter would be quite uncomfortable with this whole ritual, but it was meaningful to me [and thousands of others]. In another side chapel is the Pieta by Michelangelo.  This is the one statue of his that moves me: the beauty of the Virgin, so young and pure, holding the dead body of her Son, grieving, yet knowing all the while why it happened.  It is as perfect as anything here on earth.  It moved me when I was 11 and saw it at the New York World’s Fair in 1964; it brought me to tears this time. The basilicais so big and so Baroque; lavish and unapologetic; politically motivated; a showcase of power and ego.  But it also the church built on the spot that Peter was martyred. 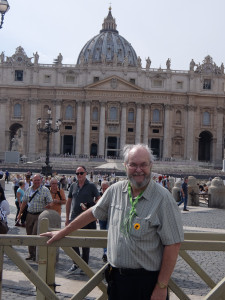 As we finished up and made our way outside, past some very spiffy Swiss guards in their 16th century uniforms, I mused on the irony of the fact that the building of this cathedral, to showcase the power of the pope in Rome, led directly to Martin Luther nailing his 95 theses to the door of Wittenberg Cathedral.  Pope Leo had come up with the scheme to sell indulgences for sin all over Europe to raise the funds to complete this edifice.

Don't you hear the voices of your dead parents and other relatives crying out, "Have mercy on us, for we suffer great punishment and pain. From this, you could release us with a few alms . . . We have created you, fed you, cared for you and left you our temporal goods. Why do you treat us so cruelly and leave us to suffer in the flames, when it takes only a little to save us? 4


Any other pope, I believe, would have managed to absorb Martin Luther and the others back into the church, as Pope Gregory IX did the radical Francis of Assisi.  But there stood the mighty St. Peter’s Cathedral and there I stood a Baptist.  Such is the legacy.  Will Jesus bring his church back together?  Only He knows when.


N4: 132 Rome Italy edition
1 Cousin Vinny’s: a stop on a bus tour that involves a store, often with a demo of what they make there and a long opportunity to purchase.  Always includes restrooms.
2 Trough: an all –you-can -eat buffet.  Always looks more delicious than it is.
3 CTC is Cheap Tourist  Crap.  It is not necessary inexpensive.  Often to be found in Cousin Vinny stores.  One must sort through and can sometimes find treasures.
4 [Source: Die Reformation in Augenzeugen Berichten, edited by Helmar Junghaus (Dusseldorf: Karl Rauch Verlag, 1967), 44.]
Collapse