Monaco is one of those teensy weensy nation-states of which Europe used to be composed.  I believe that the European Union is a better solution to the duchies, kingdoms and republics than the 19th century nations ever were.  The overall union allows a more tribal approach; you could argue that Europe is more of a melting pot than the USA was, as wave after wave of conquerors and refugees, fleeing before them, swept from East to West.  And, in many ways, continued sweeping across the Atlantic Ocean to create the USA.

The principality of Monaco has a town in it called Monte Carlo.  This town is where Prince Albert lives [in a can?] and just below the palace is the Casino.  We really didn’t care much about either.  There were tours, but to even tour [not gamble in] the Casino was €18 4. 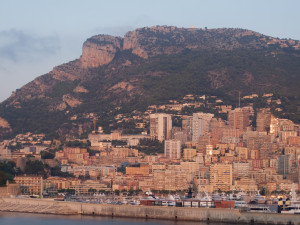 We had just finished 3 glorious, grueling days of touring, so we opted to take a late, leisurely breakfast and go ashore well after the mad rush.  We were being tendered at this port, but we left so late, we didn’t even need to get a ticket ashore.  The tenders were just running back and forth by the time we wanted to go ashore.

We had spent some lovely time lounging on our tiny balcony, watching the incredible ocean yachts arrive and anchor.  I can’t even imagine the cost of these yachts.  I went online for a guesstimate and all the ones listed are tiny in comparison.  These were at least 150 feet in length; 5 decks above the waterline; garage opening in the bow for the shore boat; 5 or more crew; diving platform at the stern.  For those of you who have been to Catalina, off California, those are shore-boats compared to these yachts.  I’ve seen one or two of these yachts off the Greek Isles, but not a fleet like this. 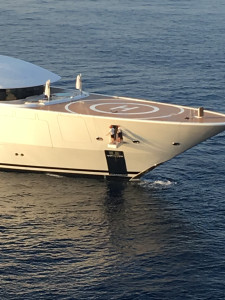 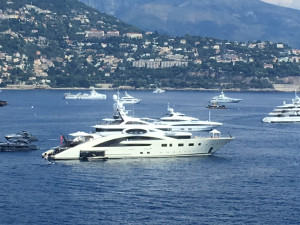 I am not jealous.  I cannot even imagine the wealth required to own such a bauble, nor would I want to have that responsibility.  OK, I did wonder what it would be like…

Did I own one, I certainly would not heave to in Monaco in such a ship.  I would find somewhere utterly deserted.  But then, the wealthy love to be seen.

The harbor of Monaco is like a major highway, with a stoplight to control traffic in and out.  Our ship was not even anchored, but was using the thrusters at station-keeping to hold position.  Most of the yachts were anchored out in the bay; hence the need for shore-boats.  But our little tenders and other vessels made for the enclosed harbor.  It is a very busy place. 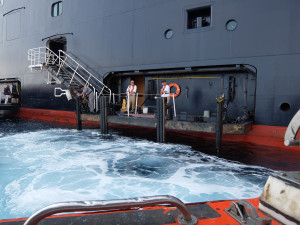 We off-loaded at a tourist dock, nicely set up for the lower sort of mortal confined to a cruise ship.  We strolled a little ways along the harbor.

Our means being modest, we boarded a small ferry that took us across the harbor for €2 each.  We enjoyed the little trip, getting the lay of the land—and the lay of layers of houses and hotels tumbling all the way down the mountain to the edge of the harbor.  And they’re still building at the edge.


From the mountain to the sea 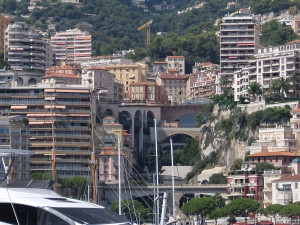 Our plan was to walk around the harbor, looking at shops, etc, at a leisurely pace.  We perused condos and apartments listed for sale [millions to buy, thousands a month to rent] I  a brokerage window.  Yachts for sale [ditto].  Interspersed were practical places: ships stores, engine repair shops—and a wonderful 2 storey grocery store.  Here I purchased “Lange de Chat” [=cat’s tongue] cookies at €1,31, a souvenir Documents de Santé [health documents] folder at €1; and a few gifts.  It was delightful.

Along the way, we noted 2 life sized bronze statues to the previous winners of the annual Grand Prix auto race.  There are apparently dozens of these around town.  I noted the loving detail of the autos, compared to the casting of the drivers, and decided what was considered important. 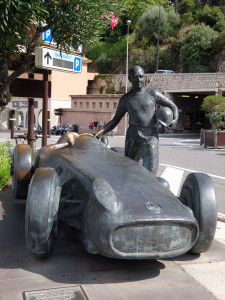 We continued our walk around the harbor, noting the €8 cokes [declined], and looked at the elevator in the car park by which we could go up Monte Carlo.  We could walk around looking at the streets and gardens.  But we could not bring ourselves to care!  So we completed our circuit, boarded the tender and returned to the ship.  I went to the bar to indulge myself in limitless diet cokes, as had become my custom.

And, even though the ship remained in Monaco until midnight, we stayed on our balcony, enjoying the view and resting our feet.


__________________________
N4: 134 Monaco edition
1 Cousin Vinny’s: a stop on a bus tour that involves a store, often with a demo of what they make there and a long opportunity to purchase.  Always includes restrooms.
2 Trough: an all –you-can -eat buffet.  Always looks more delicious than it is.
3 CTC is Cheap Tourist  Crap.  It is not necessary inexpensive.  Often to be found in Cousin Vinny stores.  One must sort through and can sometimes find treasures.
4 The Euro was about $1.25
Collapse