We got a bus [not a tour] from the ship to Florence, though we had to park about a mile away, on the banks of the Arno River.  Someday, I would love to stroll the banks of this romantic place with my lover. 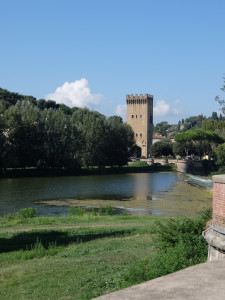 But, we had a tight schedule, with only 5 hours!  We walked at my fastest pace to the Duomo in the heart of Florence.  This is quite simply stunning.  The Medici family built this enormous church and paid for most of it with their enormous wealth.  The Medici family were bankers at a time when bankers were not supposed to charge interest to other Christians.  They probably didn’t, in the strictest sense, but money and position came their way from the important people they loaned to.  There were Medici family members all over Europe in the Renaissance, doing business with letters of credit.  By the mid-1500s a Medici daughter married royalty in France.

The Duomo is Italian in the sense that there is no square inch of its exterior that has gone undecorated.  But its huge size makes it majestic rather than busy-busy.  It is meant to overwhelm.


The Duomo of Florence 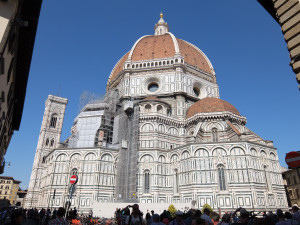 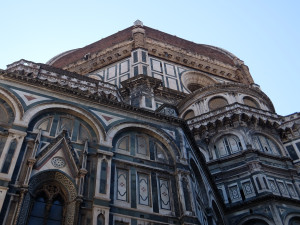 Our plans did not allow us the time to go inside, but we had as leisurely snack at one of the tables crowded around the Duomo.  This struck me as very appropriate, since merchants have always set up in the shadow of the great churches.  Commerce hasn’t changed in 5000 years [or so].

Shopping our way across town from the Duomo, we discovered that the Ponte Vecchio [Old Bridge; one of the 4 remaining shopping-bridges in Europe] had shops selling gold, silver and precious stones.  Makes sense, since the rent must be sky-high on the bridge.  We did manage a bit of shopping, just not the gold and silver… 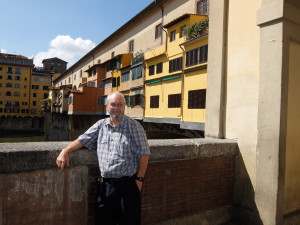 Our goal was the Pitti Palace, where I have long wanted to have a pity party.  Sadly, the photo of me pity-partying didn’t really turn out, since the palace it is so very larger and I am [relatively] very small. 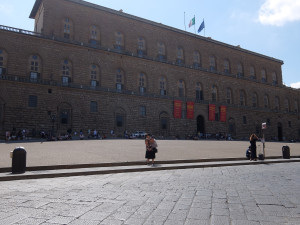 We had an excellent lunch right across the street.  I was very proud of myself; I ordered a Caprese panino, which was not on the menu.  I had just enough Italian to ask. Caprese is the fabulous combo of tomato, basil and mozzarella and panino means sandwich.  I pointed to my choice of bread. 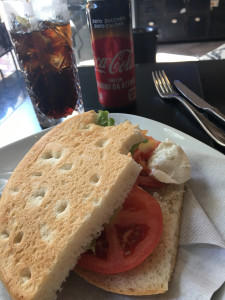 Thus fortified, we bee-lined for the Uffizi Gallery, where we had timed tickets to get in.  I really like this trend in museums.  Rather than making everyone stand in line, you can buy a ticket for a certain time online. Usually, once you’re in there is no set time to leave, although we found that the Borghese in Rome boots you out after 2 hours.

Someday, though, I would dearly love to return to Florence to actually visit the Pitti Palace, as it is crammed with famous art.  But we had studied long and hard and made the choice to visit the Uffizi Gallery.

The Uffizi is a family estate, like so many of the great art museums in Europe.  In fact, in the USA, the Getty, Huntington, Guggenheim and Rockefeller families have done the same.  When you are rich enough, your private collection needs curating and then you figure you ‘might ought to’ share with the hoi poloi.  [this is a Greek work for the many, the people].

Among the incredible works here on display is Botticelli’s “Birth of Venus” / “Primavera” and a half dozen more.  Several paintings by Veronese, El Greco, Caravaggio [our fave] were grouped by artist.  Titian’s “Venus of Urbino” was there.  Bronzino’s “Lucrezia Panchiatichi” intrigues me because I flatter myself that she looks like a younger me. 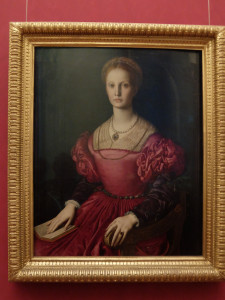 Fiortino’s “Musical Cherub” which adorns just about every syrupy Valentine’s card is much better in person.  Rubens, Rembrandt and Raphael vied for attention.  I am coming to admire Raphael, the more of his works I see.  I think he was inspired by Leonardo da Vinci [several of whose works were also displayed] but IMO, Raphael surpasses Leonardo in clarity and soul.  There, I said it.

We really had to hotfoot it through, leaving scorch-marks on the floors.  But we saw it ALL!

My pet peeve these days is people who stand back from a work of art and take a cell phone picture of it.  WHY??  You can look at all the pictures of pictures you want on the internet and in books.  When I travel thousands of miles to see a work, I want to see the brush strokes and the thickness of the paint!  So I am a jerk and go right up to the piece and take off my glasses and LOOK.  This, of course, ticks off all the people with their phones, but I DON”T CARE!

Oh, yes, Florence is still on my list of places I’d like to go to.  A half-day visit is simply not enough; this city, poised as it was between the Middle Ages [the dukes and bankers still engaged in tournaments] and the Modern Age [the Medici’s pan-Europe banking empire combined with a love of art and a desire to “give back”] deserves at least a week of exploring and museum going.  And the food’s good too.
Collapse