Not to brag, but we have been to Barcelona many times.  Fortunately, it is a cool place to visit.  Many cruise ships put in there and the harbor is new and ready for company.  Barcelona is more French than Spanish, but more Spanish that French; it is Catalan.  The language is a “Franish” blend which is easy for me since I took Spanish in high school and French in college [dumb move] and now speak a blend of neither.  The Catalan people want to secede from Spain and I guess if they could join the European Union, they could make it. But the Spanish do not want to let them go.  Barcelona is famous for Salvador Dali, Joan Miró and Antoni Gaudí, all surrealists of note.  Each has a museum in town.  We have been to none of these.  Antoni Gaudí has done a lot of wonderful architecture in Barcelona, which is very much worth seeing.

But on our other visits, we had seen his buildings, and the major museums and had a wonderful ramble over Montjuic, which is a mountain-sized park, with a cliff-side cemetery.  The Martime Museum is also superb.

We caught a shuttle from the ship into town and wandered through some familiar terrain, enjoying our memories.  The street market there at the harbor has grown exponentially and is now ‘enhanced’ by illegal vendors from North Africa hawking pirated designer knock-offs.  I’m sure you recall the Marine Corps hymn “From the halls of Montezuma, to the shores of Tripoli…”  This refers to the battle action of the Marines taking on nests of North African pirates on the Barbary Coast in the early 1800s.  Wikipedia has an interesting history; I recommend a quick read.  The Barbary pirates, however, are now in Spain and hard at work selling tennis shoes and purses.

Our agenda was to see the Museum of World Cultures on Calle de Moncada, very close to where we had tickets for a Flamenco show.  This turned out to be a superb choice. 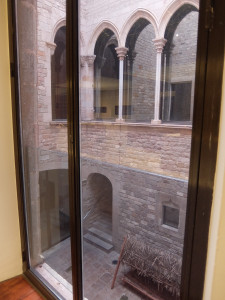 This is a world-class museum, rather small, but with one near-perfect specimen from every major culture on earth.  From approximately the last 3-400 years, anyway.  [<museuculturesmon.bcn.cat>]   Housed in 2 medieval manors [Casa Marqués de Llió and Casa Nadal], this is a must-see in Barcelona.  Here are just a few photos— 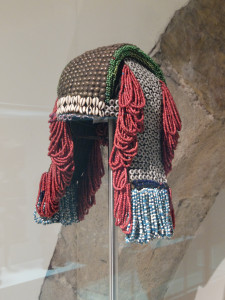 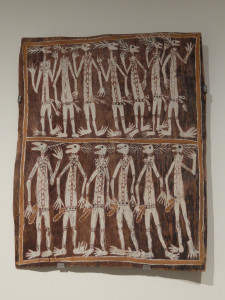 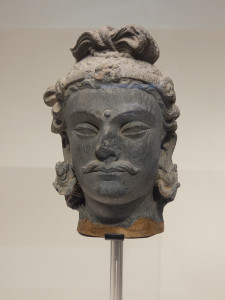 We had a dinner of tapas [modest size dishes, almost hors d’oeuvres, which combine to make a meal.  You order as many as you wish, á la carte] for me and paella for Ron.  Barcelona is a young, trendy town, so people- watching out the window of our restaurant was fun.  There were a couple of slot machines near the kitchen, so Ron had some excitement.  And, of course, no Spanish folks were dining so early.
Yummy 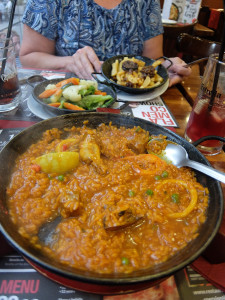 Our final flourish on this cruise was to attend a Flamenco performance.  Years ago, I had read James A. Michener’s Iberia; he was a great fan of the art, and described the meanings and history very well.

Housed in another medieval casa on the Montcada, the Palau Dalmases, the troupe promised an authentic flamenco. Ron had done a lot of searching online to find this one. 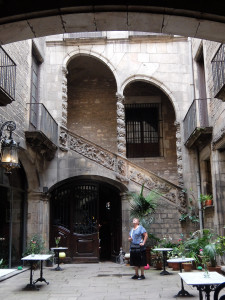 The dancers, singer and musicians are completely without set themes or musical score.  In this sense, flamenco is like jazz, where everyone improvises.  Flamenco, though the name means “flaming”, is actually full body blues.  It is an art form begun among gypsies in Spain.  I don’t believe these are Romanay gypsies, but indigenous wandering people.  The women are the chief artists, although we had a male guitarist and drummer.  The singer cannot be said to ‘sing’ but rather to emote passionately with her voice, more like a jazz saxophonist, say, than a torch singer.

The dancers [we saw 2] were extraordinary; led by their emotions generated by the singer—and feeding back to her—they move so fast, they are literally a blur.  The facial expression is one of pain and intensity.  Traditional hand gestures, clapping by the singer and the dancers, hard-soled heeled shoes and elaborate tight dresses completed the magic and intensity.


No camera can keep up with the speed 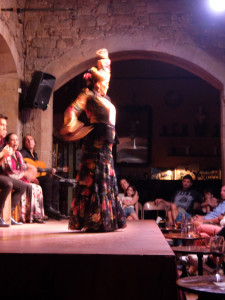 While in college, Ron and I went on our third-ever date together to a flamenco show.  It was lovely dancing, vibrant costumes and men in tight pants, but it was nothing like this.  That was a show for an audience.  This night in Barcelona was a group experience, where we were so tuned in that we felt tense and tired just from watching.  Wow.