My parents began to travel to England every year when I went to college.  My dad loved to travel and my. Mother loved England.  After I was married to Ron Buckles for 3 years, we managed to have enough money to accompany my parents on one of their trips.  We did the basics and they did their own thing, but we often dined together.  In addition to Whitley Court, a small mom&pop restaurant serving British fare and breakfast anytime, my parents also showed us the local food market for fruit and “American walnuts! (what we call English walnuts!).  But this day we four went together by underground to the outskirts of London, aka the City.  Here is a vintage piece from my father.

A VISIT TO THE GREAT EXHIBITION OF 1851

In London, the Beth al Green Museum is an example of prefabricated cast iron and glass construction which was used for the Great Exhibition of 1851 (The Crystal Palace, which was the first World’s Fair.). This building was built in 1856 near the present site of the Victoria & Albert Museum as a temporary museum, but as the permanent building neared completion, it was taken apart, moved to Bethnal Green, and part together again on the present site, northeast of the City.  On the new site it was encased in brick and some slate was used on the roof.  On the outside the effect is much like any other brick building, but on the inside, the “modular” nature of the construction in 24 foot square sections with cast iron posts and beams, makes it easy to see how the Crystal Palace was constructed using as many “modules” or units as needed to get the enormous size.  The Crystal Palace was moved in a similar manner after the Great Exhibition and lasted until 1936 when it was destroyed by fire. 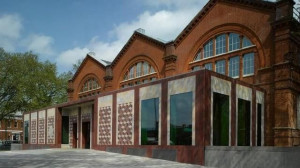 In this museum, still a branch of the Victoria & Albert, the structure itself is one of the exhibits.  That was enough for me.  For Carol and Shirley, there were exhibits of doll houses, dolls and other old toys.  For Ron there was t he exhibit of Samurai swords and Japanese armor.  With all these attractions, we just had to visit it.

In my aimless wandering over the whole place to inspect the bolted construction, I came upon glass cases filled with female figures dressed in dresses of olden times, in fact, the costume collection.  The eerie thought entered my head: “If these ladies are visiting the Great Exhibition today, I might as well do so too.”  So I set out to see the “wonderful manufactures of all nations.”  Soon I came upon a sideboard if elaborate design and nearby another not quite so fancy.  Alongside one were a couple of intricately carved and upholstered dining room chairs.  My Art Journal Illustrated Catalog described these sideboards as “Bookcases.”  Each was about 12 feet long and maybe 8 feet high.  The one made by M.M. Leister of Austria was given as a present from the Emperor of Austria to our Good Queen Victoria.  This one looked like a castle with very many towers and steeples of wood decorating the top.  The other less elaborate sideboard was not as high or as long, but still much too large for most village houses.

As I moved along, continuing to inspect the Exhibition, I found things that didn’t fit.  The spell was broken and I was jerked back to 1974 from my little trip in time.
—Herbert J. Kerr
Collapse