We had learned the day before that our tour had been cancelled due to lack of interest.  We were signed up for a trip to the old Fiskars factory, now a handicrafts studio, coupled with a drive into the countryside.  I must say, this was Fiskarly irresponsible for them to cancel us.
However, the cruise had arranged shuttle busses for a modest fee to downtown Helsinki.  We arrived before anything opened, so we progressed through town, looking at the outsides of things: shopping district, state house and huge brick church on the highest hill of town. 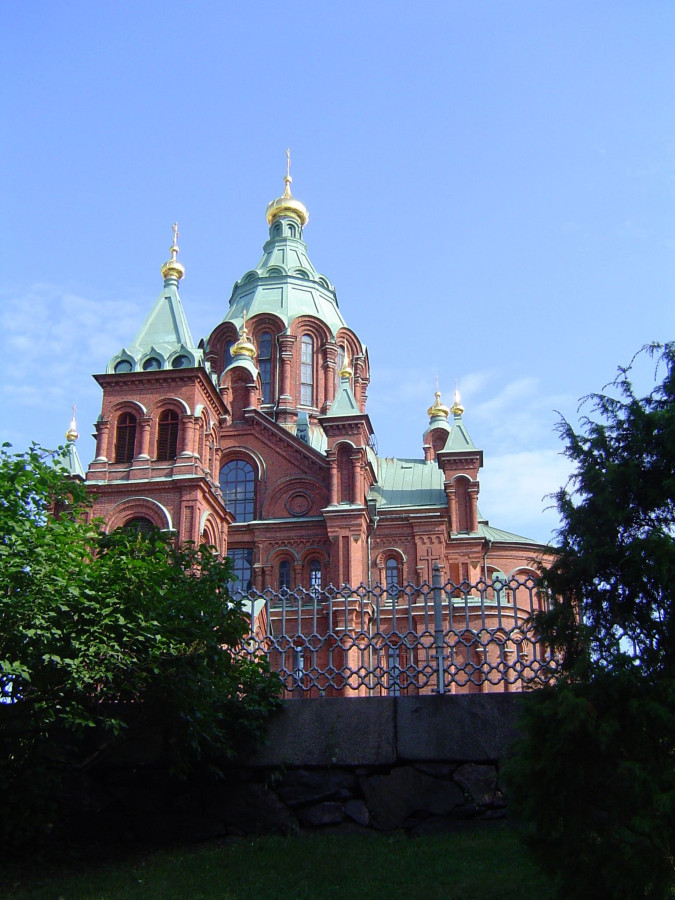 We knew that most churches and museums were closed on Monday, so our agenda was modified to shopping and a harbor tour.  We found one open store near the state house and bought a troll for my best friend who collects gnomes.  And came across some of the cutest mer-person statues ever. 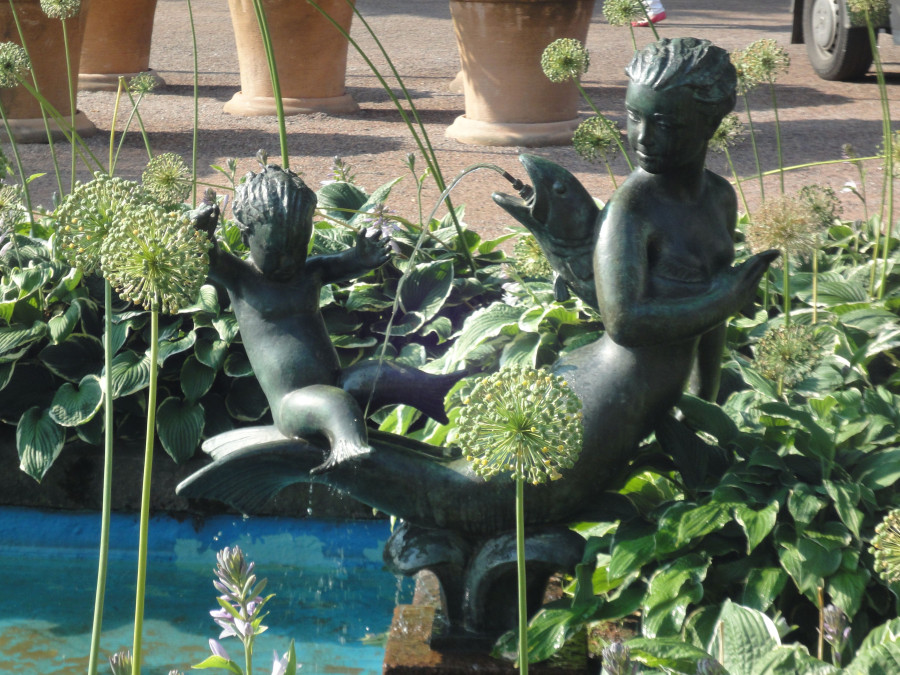 We left the church and ambled to the harbor area, taking photos.  We discovered that a large flea / fish market was set up in the square in colorful tents and awnings.  We bought harbor tour tickets, went for a coke in a charming tent offering hotdogs, then boarded the boat.
Helsinki is one of the most delightful harbors anywhere.  We could imagine coming to stay just to explore the many islands and coves.  As we sipped coffee on the upper deck, we noted the Suomenlinna Sea Fortress, situated on several islands, thus covering the whole approaches with crossing cannonfire. 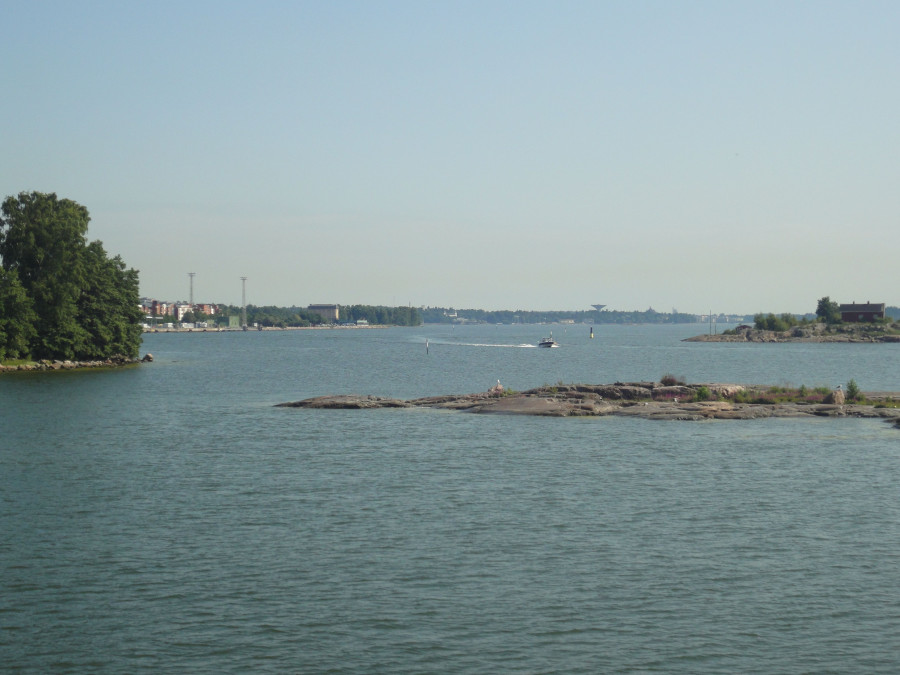 There are camping-out islands, resort islands, the zoo island, tiny rocks just clearing the surface, every one wanting to be explored.  We also noted the formidable ice-breaker ships and “Viking” line cruise ships, which made me think of ravaging hordes of pagans rushing onshore at any given port.  Oh, wait, that’s us, except we’re not pagans.  [as I write this, a Cardinal just tapped onto my library window.  I’ve let a Virginia Creeper grow over the screen.  My reward from God for disclaiming pagan status, I wonder?]
When we returned to shore, we shopped at the market square, looking at pelts, reindeer meatballs, the most beautiful fresh fruits and vegetables, and wonderful crafts—all vastly expensive.  We bought a few felted items as gifts; we tried the whole trip to be careful with weight, as we were limited to 50 lbs, and had already bought museum guide books, which is my souvenir of choice.  We were unlimited as to body weight, so took only minimal care with our eating. 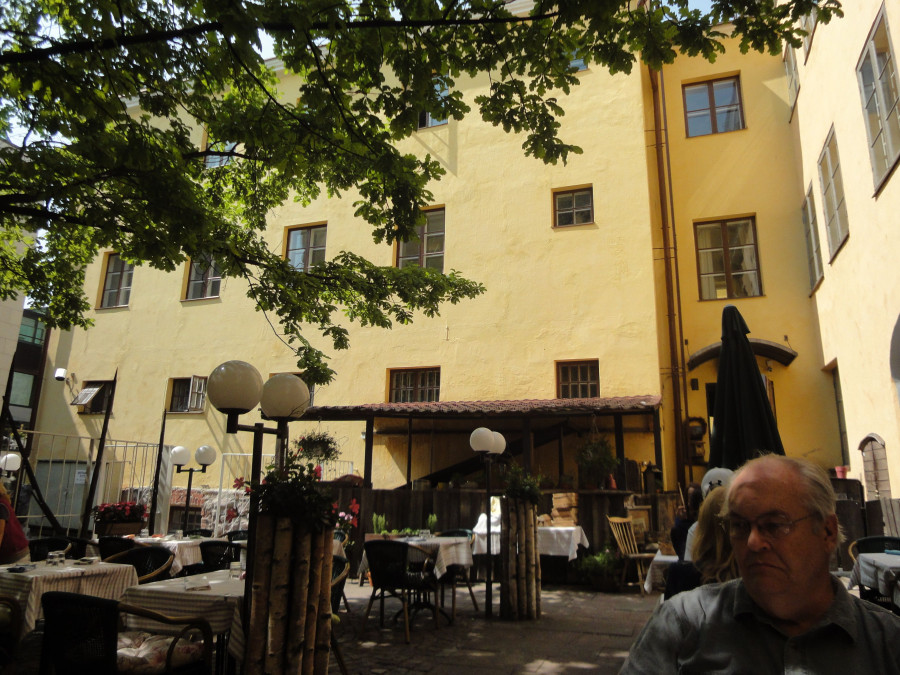 We found a marvelous courtyard restaurant called “Savotto” with a lumberjack theme.  The upper reaches of Finland have much in common with the Pacific Northwest of the US.  WE made a meal of roasted reindeer meat [delicious but likely farm-raised, as it was very tender], “Camp Salad” [goat cheese- better than Brie-- / beet salad with berries] and Blueberry Delight [that says it all] for dessert.  Lunch was a leisurely affair, which was fine since we had plenty of time.  Fellow diners were an extended family of Russians and some upscale locals.  The restaurant was celebrating their 20th anniversary and gave us appetizers of goat cheese on toast and a parting gift of odd-flavored candy.  We learned the Finnish code of behavior: Sisu, meaning persistence, reliability and responsibility.  I like all that in a 4 letter word.  Our word in America is apparently “cowboy.”  Or “rugged individual,” both now  disparaging terms.
We walked back to downtown, with our sites set on Stockmann’s, an enormous department store where, the guidebook said, one can buy anything.  Though they had a very nice restroom, we quickly discovered “everything” meant designer clothes in small sizes and large price tags.  We stalked around the district and found a sporting goods store, where I found a pair of workout pants on sale for €18 [about $30] down from €80.  Tune in later to find out why I was willing to buy ill-fitting expensive pants!  And note to self: never travel without a pair of leggings.
We walked over to the train terminal to see the large statues which inspired the design for Gotham City in the “Batman” movies, but they were boxed and draped for repair, so we caught the shuttle back to the ship for dinner and bed.