We had considered the 2 days in St. Petersburg to be the highlight of the cruise, and to say we hated it would be an exaggeration.  Let us say we do not feel constrained to visit Russia again.
We had booked a 2 day tour.  Looking into the matter ahead of time, we discovered that

We wanted to spend all our time in the Hermitage looking at the great art, with possibly a canal cruise.  This is our pattern in many port cities we visit[ed].
But with the above, we booked the tour.  We had a really good guide, though she spent a lot of time telling us what drunkards the St. Pete’s citizens are, due to lousy weather and bad government.  But she got us to our destinations right as the most popular sites opened.  This was a tremendous boon, as there were thousands upon thousands of tourists in town.
7-9-13
St. Petersburg is now usually referred to by locals as Peter.  Over time is has been called Petrograd, Leningrad and now back to St. Petersburg.  But the siege of Leningrad, where more than a million people starved to death, will never be forgotten…or called anything else.  We passed a huge monument to the siege, which was the most moving thin I saw in this town.
We passed the depressing Stalin era block apartments, which we saw being dressed up in Baltic Germany.  Petersburg was built on a swamp by Peter the Great in 1703, using virtual slave labor under miserable conditions.  To control the water, canals have been placed in town, much in the manner of Amsterdam and Venice.  There are 18th century style palaces lining all the canals.  These are built in brick, with smooth stucco in bright colors, and white or gold [yes, real gold] trim. 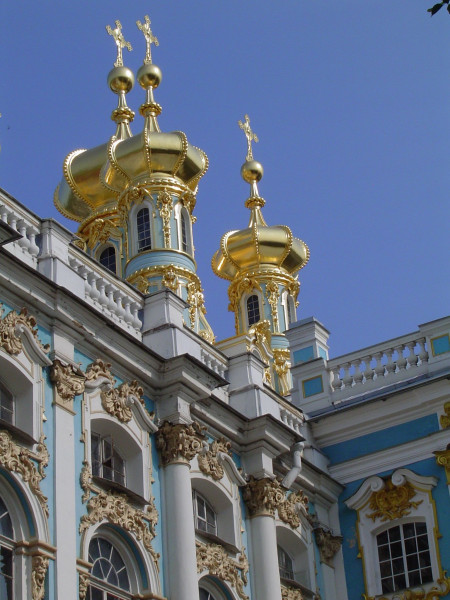 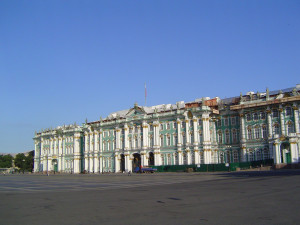 We summed up the museum as: some of the best European art displayed under opulent conditions in such a way as to make it almost un-viewable.  Oil paintings had been put into frames with glass; a major no-no, as oil outgases forever and has fogged the glass.  This does mean that you can get very close to look before the guards yell at you, but it also means that you have to get very close to see anything.  To top that, the lighting is miserable.  But we soldiered on, listening to our guide ramble on about the lives of the painters, while we ran ahead to see the works before the crowds got there.  We could move about 2 rooms away before we lost reception on our headsets, and thus we saw the Cranach the Elder paintings [1400s] and several van Gogh’s.  And we utterly skipped the atrocious mechanical clock shaped like a demonic peacock planning a world take-over.  The one Caravaggio we wanted to see was gone and the guide said she’d seen it the day before!  But a couple of Leonardo’s Madonnas and a small Michelangelo statue were marvelous.
We had lunch at one of the Romanov’s 2nd cousin’s wife’s son’s lavish palaces with the champagne and the vodka, caviar and a forgettable main dish.  Then we crossed the Neva River for the 400th time and visited the Peter and Paul Fortress, on the site of the original fort built by Peter the Great.  We didn’t get a look at the fort, though we have been to any number of similar-age forts, so we were not devastated.
The Peter and Paul Church is the burial place of the greats of the Romanovs: Peter the Great and his daughter Elizabeth; Catherine the Great and her milquetoast husband; but impressively, the remains of Czar Nicholas and his family, returned to the family church after decades of being lost and unlamented in Siberia.  It seemed symbolic to me of the constant effort of the St. Petersburg citizens to reconcile their turbulent and bloody past with hope for the future.  Which means tourist dollars, which pay for all the gold leaf, to bring more tourists.  I get that and more power to them.  But we agree that we are not hankering to return.
Our last stop was The Aurora, the gunboat that shot the cannon to instigate the Bolshevik attack on the Winter Palace.  The last thing I wanted was to dwell on that scene, so I hung out near the bus watching large birds taking dirt baths.  They all want to use the same ‘cup’ in the dirt rather than start a new one.  They get into the ‘tub’ and throw loose dirt all over themselves and then shake it all off.  It’s very entertaining to watch.  Oh, and Ron went over to take some photos of the gunboat.
Back on the ship, leaving the port, we saw wonderful outlying islands, some with fortifications and one with the strangest lighthouse ever. 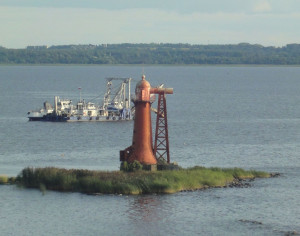 The entrance to the bay leading to the Baltic is now protected with enormous flood barriers, which can be run out to prevent the devastating flooding of St. Petersburg in the past.  With all that we saw, these barriers were the most impressive to us.  Go figure. 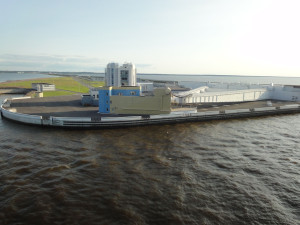