Talinn turned out to be the highlight of the tour [but stay tuned for Amsterdam].  Estonia had a “singing Revolution” where 100,000s gathered in the local vocal venue and sang their way to independence from the USSR.  It is so exciting to me, a child of the Cold War, to think at least parts of it are over.  And there’s no putting these people back on the farm once they’ve tasted freedom.
As a result, there’s a lot of touristy stuff going on, not all of it to the liking of the inhabitants.  Apparently, the folks from Helsinki come to Talinn as their personal bar and nightclub weekender, since prices are so much better than Finland.  But the touristy stuff is new enough that the items for sale in the old town are still locally made, inexpensive and of superb quality.  I advise you go there before they have their specialty goods manufactured in China.  “Designed in Estonia,” they will say, like the sweaters in Ireland and, I suspect, some of the ‘authentic Russian’ stuff we looked at.
We were on our own, as our tour “Art and Coffee” was cancelled; you know how people can scarcely be induced to have coffee these days… or is it the art…?  We caught a ‘Hop On, Hop Off’ open-top bus near the ship and took the long loop out to the site of the quadrennial singing competition and protest rallies.  There was excellent British commentary of the sights along the way, including a neighborhood of marvelous late-19th century wooden houses, some quite large.
But what makes Talinn unique is the Old Town, which largely escaped bombing in WWII.  The medieval walls and gates are still there and are a match for the wonderful medieval hilltop towns of southern Spain.  “Fat Margret” [aka “Big-Boned Margret”—thanks, Darrin] is a seemingly squat tower, which we found out was a misperception.  Tall Herman sits atop the central hill and therefore looks more imposing.  We got off the bus and began to explore.  It quickly became obvious that we would be buying things in town; just a few Cousin Vinny’s but mostly unique hand crafted or simple machine crafted treasures, made by locals or country dwellers.  Sheep are a big deal in Estonia, so lots of woolies, such as clothing, felted products of all types and toys were in abundance [but not all the same!]
We were called by nature to find the toilet, which was one of those enclosed, self-cleaning, fire-breathing, mechanical huts.  The lady ahead of us told her husband it was €20 but in fact it was €,20 that all important comma saving the day. 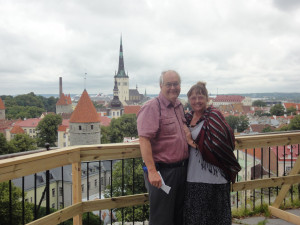 We resumed our exploration, which included a marvelous panorama just beyond the toilet [that reminds me, in Britain, instead of “For Rent” they have signs “To Let” which makes you think there is an unusual interest in scatology.]
We found a charming bar for coffee, deep in the cellar off the street, with a gorgeous young Brit to serve us.  We had a snack and enjoyed the coffee, although it was stone-cold, obviously deliberately so.  Or maybe if we weren’t worried about being polite, they would have heated it for us.
Along our rambles, we went into the St. Olaf Baptist Church, an enormous, but austere building dating from 1513 and recently returned to its calling.  Are any of you missionaries out there looking for a post?
Rambling and shopping, we discovered a narrow set of stains leading down between shops.  Sitting so that his music would resonate through the tunnel gate, was a gorgeous young man playing what I later learned was a Swedish key harp.  He played like an angel from heaven and I stood riveted, listening.  Ron had tipped him and moved along; when I ‘came to’ I hurried through the gate, thanking the young, blond angel. 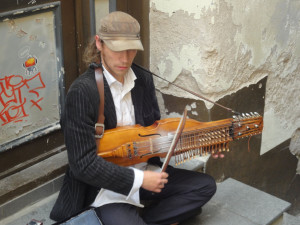 The little street defies easy description.  It plunged off the main street of old town, through a low gate and immediately turned a sharp corner.  At some point, a sturdy metal railing had been installed down the center of the stairs, which meant that, to get into a shop on the other side, you had to u-turn and climb back.  Each shop had from one to several steps to get in, depending on where on the hill they were, and whether the upper floor opened on the main street.  All the steps were worn and had never been of uniform height.  I am assuming this had been the one of the pedestrian gates to the city and so was both defensible and commercial in equal proportions.
We made our way to Fat Margret to the Naval Museum and became very glad our tour was canceled.  We would have missed one of the best naval museums we’ve seen [far better than Greenwich].  As it was, this meant we missed the art.  But we’d had a lot this trip and more to come.  [Stay tuned for Amsterdam].
The tower itself features a winding staircase up a central support, easily defended.  We paid our admission so we didn’t have to fight our way to the top.  There was much to see of the fishing industry and Baltic battles through time.  Gunnery and rescue equipment; skiffs and cooling pots; uniforms and knots; it was all well displayed.
When we reached the top floor, we decided refreshment was in order, so we followed the signs to the rooftop.  We were unprepared for the narrow metal staircase winding it shaky way up the outside of Fat M!  Ron, who has little fear of anything, was actually uncomfortable!  I paused to catch my breath and observed a neo-neon-medieval chick lobbing arrows at a butt.  She was a long ways down. Undaunted [well, somewhat daunted], we reached the top to find selection severely limited, so we settled down with Estonian root beer called Saku.  It is made from  a root unrelated to the sassafras [aka sarsaparilla] that we make our root beer from.  I thought it was delicious, but Ron was unimpressed.  We made our was to the staircase, where I paused for a dramatic picture by Ron still on top, when we were separated by a busload of fellow cruisers, on their tour stop for refreshment at Cousin Vinny’s Ice Cream and Root Beer Stand on Top of Fat Margret Tower, with bathrooms and souvenirs on the ground floor!
We made one more stop, at the KGB building, site of terrible suffering and death.  In gallows humor, the locals say it is the tallest building in the world, since, you can see either Heaven or Siberia from the basement.
We then joined our fellow Hoppers On and Off catching the next to the last bus back to the ship.  There was a delightful bazaar on the dock, where I grabbed some last minute essentials.  Yes, essentials…
Then on to dinner-then-bed, as usual.