Sometimes a blog gets left by the wayside while life happens.  You may refresh your memory, if you care to, by reviewing the last entry, wherein Ron and Carol and 8 other people set out to tour the Carnival Legend.  Finally, I will finish the tour.
After the Galley, we made our way to I-95; this is a broad thoroughfare from stern to bow.  Everything happens along I-95, which it is called, apparently on all cruise ships around the world.  The crew quarters, crew dining hall, crew bar / club and all manner of lockers, offices and the like.  It is because of this corridor that your baggage arrives in your cabin before the cruise is over.  I would love to be a fly on the wall to see the logistics of that, but I would not like to be swatted.
A few floors up, our guide took us to his HR office, while telling us that his other office is the crew’s bar.  I was unclear whether this meant he was there to counsel crew members or whether he had something of a drinking problem.  Maybe both.  He went on to explain the wage scale and that the only thing crew must pay for onboard is internet access, alcohol and cigarettes.  He pointed out many resources in his office which crew could use to improve their English, entertain themselves or learn other skills.  Ron and I were ready to sign up.  This struck both of us as a fantastic way to get out of a country / situation that stifles you and make something of yourself.
We toured the laundry, which is what you would expect.  Notable was a huge machine into which wet sheets were fed by 2 men; the machine rolled the sheets through, drying, ironing and folding them.
A visit to the waste treatment plant was fascinating.  Carnival does all it can to keep the seas clean, including an entire waste treatment plant on board (better than most cities); a kitchen garbage chopping machine; a compactor for trash that can’t be chopped; a freezer for kitchen waste.  The upshot of the whole deal is that ships cannot dump waste within 13 miles of shore, and when they do dump, it must meet regulations.  By the time they dump, water must be treated for human waste and the food waste must be chopped fine.  What a bounty for the sea creatures!  [Carnival to cut pollution from cruise ships http://fxn.ws/18zGZqq]
From there, we went up to the Bridge, of course the highlight of the tour.  After being reviewed by Security, we were allowed in.
AMAZING!  We got to stand at the Flying Bridge, with its set of controls, whereby the Captain can delicately parallel-park the enormous ship with controls that look like a video game.  We have long been amazed at how slick this is, as thrusters push the ship sideways to the dock.  But to see from this vantage was truly special.  There’s a glass window in the floor that the Captain can watch through to dock—and the rest of us got a mite acrophobic.
I then made some asinine remark about driving the ship and Captain Allesandro Galotto invited me over to steer.  He was, of course, kidding, as the tiny steering wheel on a stand is not really connected to anything.  But it made for a fun photo as I explain to him that I can’t see the numbers to steer the course.  Naturally, I was looking at the wrong place. 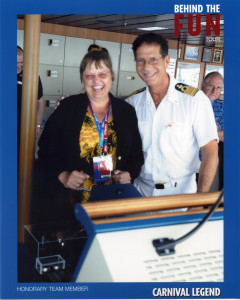 Everyone got a turn to “steer” and the Captain graciously answered questions.  Ron queried about the very shallow waters we had just come through [43 feet under the hull].  Turned out, Captain Galotto had spent some time on the Chesapeake and its shallow waters.
Someone asked if the Captain ever lost his English in an emergency and reverted to Italian.  He said there had never been such an occasion, but suavely assured us that no matter the language, he would be obeyed.  There was no doubt about that in my mind.
We finished up in the specialty [expensive] steak restaurant, where the bartender presented us with swan shaped soaps he had carved, scrimshaw style, in his off hours.  We sat down to juice, goodie bags [all “Behind the Fun” back-bag, hat, lanyard] and “do you have any last questions?”
When we returned to the cabin, there was a plate of the tuxedo-strawberries we had watched being made in the galley!  This was the best Sea Day EVER!!!