New Newport News News: Baltic Cruise: Amsterdam edition
I am so glad we got to go to Amsterdam!  The trip through the huge passageway, going inland from the sea lock, our ship towering over the landscape, is unforgettable.  Little villages on either side are impossibly picturesque, connected like quilts with the threads of bridges.  If we ever go back, I would stay in the countryside and commute to the museums in town.
Ron loved Amsterdam itself.  It is charming, and like many waterlogged cities on the Baltic, it is patterned on Venice.  The tall, narrow houses testify to the fact that taxes were based on the house’s footprint, not its square feet.  Most of the houses sport a rooftree extended to provide for a pulley to get furniture in and out.  I have never seen so many bicycles in my life, nor so many carefree [drunk? stoned?] young people.  Amsterdam is not a town to hurry through, but that was what we needs must do.  Ron had researched the city and knew where to catch the local trolley and which one to get on.
Our agenda was focused on the Ruiksmuseum, justifiably world famous for Northern European paintings and sculpture, with nothing jarringly modern.  Of course, Dutch artists loom large [often literally]: van Eyck brothers, Rembrandt, Rubens, van Gogh, Ruisdael and dozens more you would recognize.  Beautifully displayed with filtered natural light pouring through the ceiling, there are no shadows or frustration seeing the work.  There are discreet ropes keeping one from drooling on the paint strokes, but even I, with my poor vision, could get up close enough.  And, despite the cruise ships in port, only a modest crowd.
Ron said, “If you look at each brush stroke [through your magnifying glass], we will never be able to finish!” inadvertently echoing an old art joke about looking at every painting and not seeing it all—a truism about the different approaches to visiting art museums.  He didn’t know I only wanted to scrutinize the amazing work of van Gogh [pronounced to rhyme with ‘jog’], whom I am just coming to really appreciate.
I cannot gush enough about the quality of the Rijksmuseum, and indeed their gift / book store.  To lovers of art, it is a pilgrimage.
We broke for lunch in the vast park, situated among the museums, and under which is the parking garage.  While waiting for Ron to bring our sandwiches, a youngish man asked to sit at the table.  I had no problem until he lit up [tobacco? pot?] and I asked him to leave.
After lunch, we hopped the tram and got off downtown, where we had spotted a Pylones.  We first ran across this fun and funky store in Paris on the Ile de St.Louis,[ the most expensive real estate in the world, we were told.]  I found one in NYC on Lexington.  There is one in Torino Italy in the train station.  It seems to be Scandinavian [?] type slicked down or cuted-up gadgets, and we bought telescoping forks and spoons [out to 18” or so] for….well, you know who you are.  I believe Pylones is an experience more than a store.
From there, we walked through the historic old town to the modern downtown near the train station, area where we could get our choice of canal cruises.  We chose an hour-long tour, but regretted the enclosed boat.  I would rather be rained on that have such a limited view!  But we got fascinating glimpses of some of the little drawbridges, which people can pull down at their convenience.  The canals were full of private boats in a continual parade.  We had some tight squeezes around corners; some views of bizarre bridge décor; small locks for traversing between canals, all open and unused; and a scenic array of tiny streets, tall houses, taller churches; tiny cars, endless bicycles and partying people. 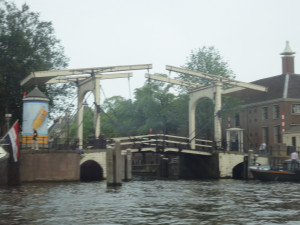 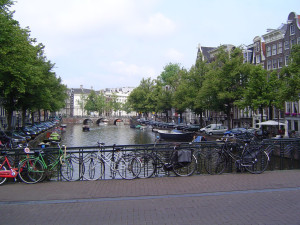 I would go back to Amsterdam in a heartbeat to see the other museums in town, including a whole one of van Gogh.  We can envision a driving trip from Normandy to Amsterdam.