Carnival Cruise Lines loves me so much, they emailed me a free cruise.  I figured it was a scam, so I fwd to Ron, who looked into it—and it was for real!  All we had to pay was taxes.  We figure that they need to fill the ships, what with all the bad publicity, and they hoped we would spend a fortune onboard.  We began by upgrading to a balcony room, which proved to be a delight [as always].  The only catch was that we would sail out of Baltimore MD.
So we drove up, leaving plenty early since we know the traffic snarl that always presents on the 95 nearing DC.  When we did arrive at the ship, we were astounded at how smoothly the whole process went.  Baltimore has this thing down to a fine art: from parking, to luggage collection, to check-in.  I have never seen any operation this smooth, on any of our cruises!
So it had to happen that something would “go wrong.”  This was in the guise of huge waves off the coast of NC, measuring 7, then 9 on the Beaufort scale, meaning winds of up to 47 mph.  And a huge cruise ship wallowing like a barge.  We are greatly blessed by cast iron stomachs, but Ron had a time in the shower.  He said he looked like a street mime in a “box,” as he had to keep one hand on the wall at all times.  We had breakfast in the dining room, as we have learned the pleasures of a served breakfast.
We later had lunch at the Trough¹, which on Carnival Pride is called The Mermaid, and it has dozens of naked bosoms hanging from the ceilings—on mermaids, but still!  I went to the pool from there, where I was kicked to death by children who, their mother explained, had nothing else to do, since the pools were closed for the weather.  I returned to the cabin to sulk, opening the balcony door to listen to the fog horn, when Ron burst through the door, papers flying from his hands in every direction.  He had been to the art preview and seemed to want to share.
Our balcony door stayed open most of the trip, except when the neighbors smoked cigars and / or tortured babies.  We went to dine every night, enjoying the company and fine food.  One of the waiters told me he was a momma’s boy and missed her so much, he asked me for a hug, with tears in his eyes.  I told him she was proud of him and prayed for him everyday.
That night we saw the stars and had smooth sailing the rest of the cruise.  The captain had steamed through the storm and now slowed a bit.  I spent most of the time at sea reading and drinking diet coke.  Ron went to the art auctions and read as well.  We spent a lot of time on the balcony and saw dolphins one afternoon.  Before dining, we had an aperitif of Limoncello, which Ron had ordered for our cabin.
On Tues, we had dinner at the Chef’s Table, a behind the scenes tour of the kitchens, let by Chef Panda Nirada of India, and a 10 course dinner / sampler served by his own hands.  Ron and I are not “foodies4” but we enjoyed the experience immensely.
Wednesday, we took a bus to Lone Cabbage [refers to Cabbage Palm] Fish Camp, where we went on an airboat ride across the shallow river delta, saw many wild alligators, ate some farm raised ones and met rescue animals, including a boa.
Thursday, we docked in Nassau.  Ron and I disdained a bus tour and walked Bay Street, away from the tourist area.  We found a marvelous store / workshop called Mary L’s featuring handmade jewelry [some from beach glass] and hand made basketry [the kind you used to find on the islands].  Sales area is in front, with Grandma showing everything; cash register by the owner; and her daughters crafting in the workshop.  We had some delicious but costly lunch and crossed the tall arching bridge to Paradise Island.  Following a map, we walked to “beach access” at Cabbage [palm] Beach, past an open gate and onto a hugely crowded, trashed beach.  I did find a few shells, but walking back to the street, we found the gate padlocked!  We had to shimmy under, the lowest limbo I ever hope to do.  It’s amazing where you can find sand, days later.  We walked to the ferry service, which took us back to the harbor.
Friday, we made Freeport on Grand Bahama.  We had a chatty personable driver, with the most glorious honey voice and good sense of humor.  He pronounced Caribbean -uh-bee-un.  He took us to Cousin Vinny’s² Fresh Vegetable and ³ market.  In this case, Chinese Tourist Crap.  Veering from his plan, our driver took us to Taino Beach, which is the most beautiful beach I have yet seen.  Very few people were there, and those from our ship, we walked sugar-white, sugar-fine sand and gazed out to the most perfect aquamarine waters you can imagine.  And back to the bus past coconut palms. 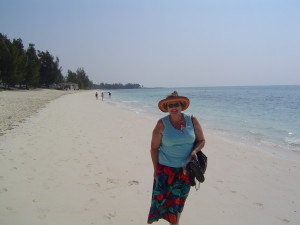 We finished at Port Lucaya Marketplace, again mostly Chinese , with very high end items interspersed.  Strange combo.  We had a latte and cinnamon roll, having toured the whole place quickly.  On the way back to the ship, we learned that the “fillymingo” is the national bird of the Bahamas.  Relaxing on our balcony waiting sailing time, we spotted a 6-7 foot barracuda swimming the harbor, through crystal clear waters.  It is a good feeling that the huge cruise ships dock here everyday, as well as massive container freight vessels and oil tankers, and they leave the waters so pure that a barracuda can be clearly seen 8 decks above the surface of the water. 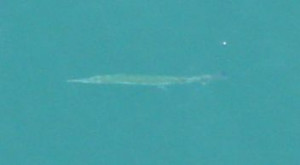 1.The Trough is the buffet on any ship where they offer food at all hours of the day and night.
2. Cousin Vinny is any relative who has a sideline, often involving kickbacks.  Some Cousin Vinnys will drive you to the airport etc.  Upscale Cousin Vinnys have specialty shops that the tour busses call into.  These Cousin Vinny stores have bathrooms and sometimes free samples.
3. is cheap tourist crap.  Such stores are sometimes Cousin Vinny stores.
4. A “foodie” is someone who loves food and knows about cooking it, whereas a “foamer” is usually used in connection with trains, and means one who loves locomotives and knows all about them personally, by name and number, and are foaming mad for trains in general.  Ron and Carol like trains very much and love to ride them, but we are not foamers.