The Field Museum is outstanding in every way and is what a natural history museum should be; it compares well with the American Museum of Natural History in NYC, which is saying a lot!
The museum is undergoing transformation from the traditional dioramas of taxidermied critters in their natural habitat [which I love], which are now off to the sidelines and in the lunchrooms [odd].  Andrew and Zoe enjoyed walking through the swamp section which included a muskrat like on our creek.
Sue the T-Rex is there, though her head is a cast, as the skull proved too heavy for the way they wanted to display her.  Also, they don’t really know if Sue is a she, so why name her that?  The skull is displayed upstairs in a case, another odd choice, imo.

There were 2 outstanding exhibits that we all loved: The Evolving Planet and Underground Adventure.
Evolving Planet tried very hard to explain Earth through science, but of course, they can’t really overcome the basic questions: what started the universe and then what started life?  Leaving that aside though, it was wonderful, with interactive movies; screens and buttons for Zoe to push; a marvelous array of trilobites from the Cambrian Explosion [of life forms]; dinosaurs and giant mammals from ages past.  It was arranged in a long narrow snaking hallway, so you strolled / ran through at your own pace, walking through 4 billion years.

The Underground Adventure shrinks you down [painlessly, by way of optical illusion] to less than the size of an ant and you go into the soil to see what lives there.  We were attacked by a mother earwig, saw the thread-like fungus which produces mushrooms, and were threatened by a spider.  It was informative and just scary enough for all ages.  Zoe was thrilled and relieved when we returned to our normal size and could look at the bugs with a magnifying glass. 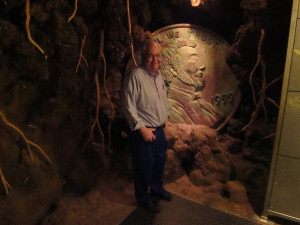 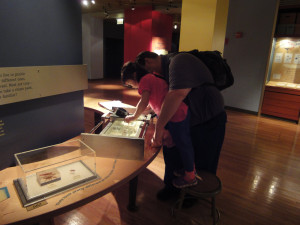 We had some lunch, and allowed Zoe to rest [she could not nap!] and finished the museum [missing gems; anthropology; plants….]
We paid homage to the Giant Ground Sloth in memory of Simon [take that any way you wish].

On Thursday, we took an express bus [still a long ride!] to the Oriental Institute on the campus of the U of C.  This is a world class training center for classical archaeologists and I expected this to be the highlight for me.  It may be a fine school, but it is an old fashioned, poorly labeled mishmash of artifacts from select digs done by the Institute.  Zoe and Andrew had the best time, since they purchased worksheets at each display, which they used for a scavenger hunt.  Zoe and Mom did get a chance to walk like an Assyrian though. 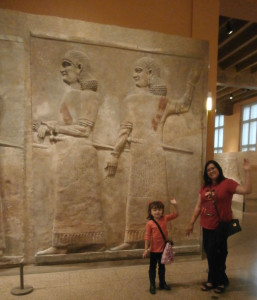 We had a delicious Greek lunch as we walked back to the bus stop.  I had a curry chicken salad, which also came to the hotel for my supper.

Andrew and Theresa went out to shop and go see a comedian they admire, while the old folks and Zoe stayed home.  Ron bought additional supper at “Pop’s Tummy.”  Zoe and Carol sat on the tile floor and did watercolor painting.  One of Zoe’s wet paintings ran in such a way that it looked like a hummingbird; one way that God winks at Theresa, as these birds were her late husband’s favorite. Then Zoe and I took a shower; Zoe remained in for an hour, playing, while I sat with her and chatted.

Friday, we had breakfast and said goodbyes.  TAZ went on a walking tour of some parks and fountains and we went back to the Art Institute to finish up.  We were so tired that we were beginning to shuffle through the art, so after lunch we walked back to the hotel, got our bags and caught a cab to the train station.
There, I overheard someone walking by saying, “I am a citizen of the world.”  This is so 1960s, that I marveled.  And I wondered if there are other people outside the USA that think this way.  And I concluded that there are few IN the USA.  No more “Ask not what your country can do for you…” as John F. Kennedy told us.  More “I want mine before it all runs out.”
After relaxing [in a stupor] in the Metro Lounge, we made our way to the train and climbed to our roomette 007 [cue theme music, please].  Just as we pulled out of the station, Theresa texted that they had landed safely at Los Angeles.

And I thanked God for His blessings:
Our Father, the Father of us all,
In Heaven where you are.
Thank you for your blessings.
You have been teaching me to let go and
let You do Your work.
And You brought about Your miracles
And Your winks.
Amen.