On our second day in Orlando, we went to EPCOT, as we got an extra hour in the AM for staying at the resort hotel.  EPCOT, which used to stand for ExPerimental City of Tomorrow, was designed as a permanent world’s fair.  This enraged my father, who loved to go to world’s fairs; I’m very sorry he didn’t decide to go see Walt’s version, because it is good!  Disney did 3 major exhibits for corporations for the New York World’s Fair of 1964-65: Pepsi “It’s a Small World”—yes, THAT one / Ford—a ride through time with animatronic dinosaurs, which are now at Disneyland / GE “It’s a Great Big Beautiful Tomorrow” which was the large round building at Disneyland where the stage stayed put and the audience revolved.  Disney sent a lot of people to that world’s fair to study crowd control and they got great ideas of how to entertain people standing in line.
EPCOT is spacious, clean and corporate-sponsored, with lots of fountains and dancing waters.  There is an evening extravaganza of waters, lights and fireworks, but we got too tired to stay.  [Another note about a long rest in the afternoon and returning to the park in the evening goes here.]
We went to “The Land” immediately and took the “Living with the Land,” which is an agriculture / boat ride.  You float past the farms of the past and of the future and into a giant greenhouse where they are growing food experimentally.  We liked it so much we got right back in line and rode it again.
Photo: Living with the Land 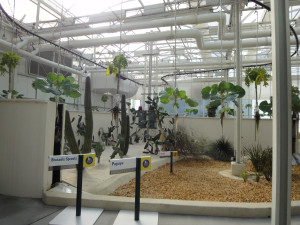 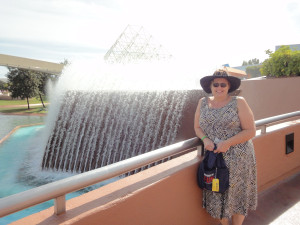 After a coke at the wonderful food court, The Seasons, in the atrium of the building, we began to work our way around the park, planning a counter clockwise attack, such as to hit our FastPass+ rides on time.  We visited “Captain EO” for old time’s sake.  We remember when this opened at Disneyland in 1986 and we enjoyed it greatly at the time.  Then, when Mr. Jackson fell from grace, Disneyland pulled the show [1996]; now that he is dead, they brought it back as a tribute. As far as I can remember, this was the first 3-D show where the seats in front of you could blow air and water on you to coincide with action on the screen [aka 4-D].  I had quite forgotten that George Lucas produced the film; there were a lot of “Star Wars”-y bits and Francis Ford Coppola was also involved.  The film stands up really well and you can watch it on several web venues.
From the sublime [how tragic that Michael Jackson destroyed himself] to the ridiculous: “The Seas with Nemo.”  We enjoyed the film “Finding Nemo,” but this ride was stupid.  I guess we were supposed to be learning something about the ecology of the oceans or maybe ‘living’ the film, but it was as garbled as “Splash Mountain” the day before.  Walt would have said, “Fix it.”  The ride dumps out into a large aquarium, which is wonderful, but, as had recently visited the Shedd Aquarium in Chicago, we breezed through.  It
looked like a grand place for adults with children.
We then veered off into the World Showcase, which is a world’s fair series of pavilions devoted to different countries built with scaled down versions of their iconic buildings.  All are grouped around a large lake on which the evening show was—fireworks, dancing waters, music [also like a world’s fair.  The NY 1964-5 fair excelled at this].
We went to the mini-Canadian Pacific RR grand hotel wherein there was a 360º film criss-crossing Canada.  I found it odd that when Celine Dion sang, it was NOT “O Canada” but a tuneless thing.  Oh, well, her heart will go on.
The China pavilion had a small museum about tomb sculpture and included 1/3 scale terra-cotta warriors; and a 360º film.  Those stone mountains in southern China always look unreal, no matter how many times you see pictures.  Maybe I’ll have to go there just to believe it.
Picture: small scale terra-cotta warriors----- 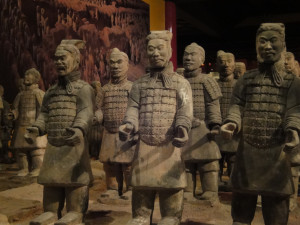 Norway had a tiny but packed room showing how Disney had used costumes and architecture from their version of The Snow Queen “Frozen.”  This actually inspired us to want to see the film [now being over-hyped] and we enjoyed it very much indeed.  We were sorry to have missed it on the big screen.  Lesson learned.
Japan drew us with the sound of a drumming group and then into the museum, which was about how trad folk characters have been transformed by manga and anime.  BTW, I learned that it is not a man in the moon, but a rabbit.  You can clearly see the long ears.  Of course, the manga version is a long legged sexy girl in a mini shirt.  With rabbit ears.  Say, didn’t Playboy already come up with that?  Japan also had the finest shop in EPCOT; I bought a kimono and we chatted up the clerks in our rudimentary Japanese.
Our final FastPass+ was “Spaceship Earth”; Siemens corp. sponsored a long ride in a pod through the iconic dome of EPCOT telling the history of data storage, from cave painting through papyrus through massive computers and [literally] through Steve jobs garage.  Coming back down the dome, your pod’s computer asks you a series of questions which it makes into a short film about “your future” which you can email to yourself.
Picture--Even in the future, I will have no neck. 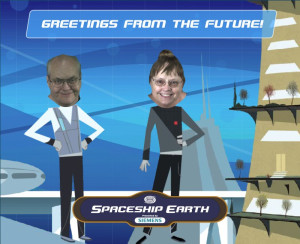 At the end of the ride is a huge room of interactive learning stations which we were too tired to explore; it looked marvelous.  But we were not too tired to go right back out and stand in line to ride again.
EPCOT's iconic dome = "Spaceship Earth 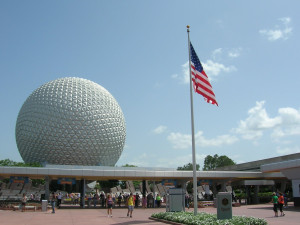 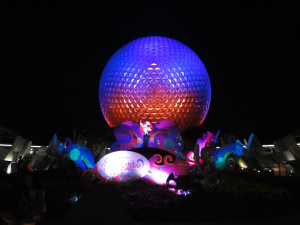