Universal Studios is no Disneyland.  Out West, at least, it started life as a genuine working movie studio and you could recognize the back lots from dozens of movies.  All of us got to make a video of the “Star Trek” show, before it shut down for good.  We loved the live action “Conan and Red Sonja” show and the “Miami Vice” stunt show. Then over the years, it got more touristy, though we kept going back.
But Universal Studios in Florida is anticlimactic.  It is all rides and shopping, no shows.  We wanted to see the Harry Potter castle, village and train, and were pretty annoyed that in order to do all three, you have to buy admission to both the Universal parks [Studios and Island of Adventure].  But we did it, assured that that meant we would never have to go back to Universal ever again.  And we won’t.  Even by next year, we would be too old to tolerate the rides.
The Harry Potter Hogsmeade village is very clever, but it is all shops and restaurants.  It is done up with “snow” on the roofs; very odd in Florida!  There is one ride there, which is the Hogwarts Castle.  The wait line is long, but very cleverly arranged as a grand tour of the castle, with filmed inserts of the movie actors creating a storyline.  The actual ride is a very rough indoor combo ride and film experience.  We were so badly shook up by this that we were actually dizzy when we got off. Some muggle in Hogsmeade 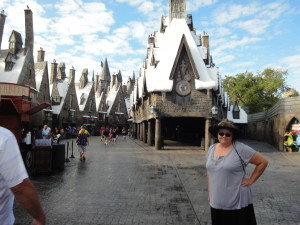 The Hogwarts Express train ride* was by far the best, and the storyline is different going in each direction.  Long line, of course, but you get into a compartment of the Hogwarts Express [8 people to a compartment, but all have a good view].  The “window” shows wonderful views between London and Hogwarts [and going back], from the mundane of the city to the magical forest around Hogwarts.  The inside panels of the compartment are frosted and you can see the characters’ shadows against the glass, as they converse.
photo
While on the Island of Adventure, we rode the Jurassic Park “river” ride where they explain that nothing can ever go wrong….and then it does.  Maybe I’m too old, but it didn’t seem to have any surprises.  You even figured you were going to get drenched.

Ron distracts the T-Rex while I run away. 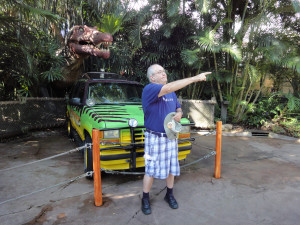 Then we took the train ride to “London” to visit Diagon Alley and Knockturn Alley [Harry Potter].  Again, it is a wonderful accurate recreation of the movie sets but is nothing but shops and restaurants.  Again, one ride: Escape from Gringott’s.  Again, it has clever entertainment while waiting in a lengthy line, an extremely rough ride, plus very unfriendly to handicripples [lots of stairs].  We had sore muscles by that evening from these 2 rides.  [Poooor old whiney people!]  Note the dragon on the bank.  It spewed real fire at intervals. 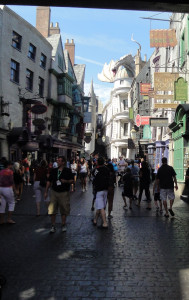 We ate lunch in The Leaky Cauldron; it is quite expensive, but very good British pub food with lots of veg.  Better than in England, for that matter!  [Long wait to order; long wait to be seated; long wait to be served; not enough to drink.]  Hey! it's empty! 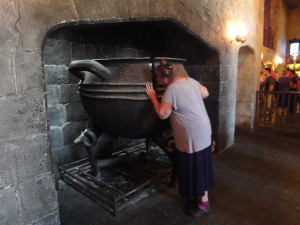 In the main Studio Park, we wandered around, enjoying the clever, themed areas. 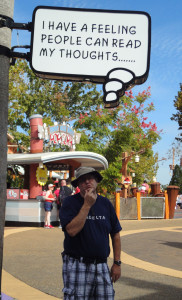 Of all these, the Spiderman ride [indoor ride with film / rough but not too bad] was the most amazing, as it had virtual characters actually land on your ‘vehicle’ and talk to you.  We also liked a kid’s “time travel” ride back to the age of dinosaurs, which was about our speed of coaster rides.  We shopped a little, ate some more, but decided Disney does the whole idea better. [But thanks for taking me there, Ron!]
But, Walt, your idea of a theme park that the adults their kids can enjoy together has gone around the world and through the generations!


N4 88 Orlando- Universal Studios edition
Footnotes.  On all our trips, our feet are noted for great fatigue and blisters.
*Foamer is usually used in connection with trains, and means one who loves locomotives and knows all about them personally, by name and number, and are foaming mad for trains in general.  Ron and Carol like trains very much and love to ride them, but we are not foamers.
Our website www.bucklesfamily.net shows pictures and has a sign-up for our guest room.
www.carolbuckles.livejournal.com for my blog
Tags: florida, new newport news news
Subscribe