I didn’t really want to go to Paris, because I believed all the negative things people say about the French.  But Ron was very interested in going; we were on our way to Barcelona in Spain to meet up with a tour group.  Ron had gotten us a tiny room—with a bathroom en suite!—which was only big enough for the bed and a TV.  We joked that we had to go into the hallway to change our minds.  But it was slap in the middle of old Paris, walking distance to the Louvre.  In fact, if you watch “The Bourne Identity” you will see our stomping ground.  That is, the walking-about scenes, not the car chase scenes.

Ron had just begun talking meds for diabetes and got horrible leg cramps on the airplane, so we walked around town right after we got there.  Old Paris is probably the most walk-able town I have ever been to.  It is clean, scenic, no graffiti, and the people are delightful.  Everywhere we went, we had friendly faces, willing to help, and enjoying our “French”.  And the gend’armes did not shoot me when my skirt blew up over my head and I screamed right behind them.  Now, that’s restraint!

The Louvre is by far and away the best art museum in the world.  Not only did the French nobility collect great works for centuries, but Napoleon stole a great deal more, as he conquered other lands.  The areas of specialization are sculpture and painting.  The Medieval collection alone took our breath away, in breadth of scope and numbers of items.

Out of our week in Paris, we spent 2 full days at the Louvre and I went back 2-3 evenings on my own.

The Louvre is crammed with famous sculpture, but I won’t name names.  Their website is well worth a visit whether you’re on your way to Paris or not.  The most notable are the classical Greek works and deliberate copies of style from the 18th century.  The sculpture galleries are filled with students sketching the statuary; cheaper and easier than hiring a live model, and the marbles do not take smoke breaks.

Ron has developed a style of visiting museums which involves studying ahead of time to find out what the most notable works are well before going there.  Again, a visit to the website is useful and we always buy at least one guidebook ahead. We then plan out what items we MUST see and those that are good and what we will skip.  Typically, we start in the ancient world and then go to the most famous pieces for a given museum.  This is not as easy as it sounds because the temptation to look at other things is very strong.  But unless you have loads of time and energy [or live nearby] you cannot see it all.  When we arrive, I like to purchase the official museum guide so I can check off the items as we see them and go back and read more later.  Inspired by those students, I also take sketching materials with me to highlight bits and parts of works.  I invariably throw these sketches away when I get home, but I love the idea of doing it.

Another day, we went to the Left Bank to the Musee de Moyen Ages [Middle Ages Museum], where they have the bits and parts that were left of the Cathedral of Notre Dame.  During the French Revolution, the cathedral was literally broken to rubble, as the citizens rebelled against the nobility and the church.  The Notre Dame you see today is a 19th century reconstruction almost completely: all the gargoyles, statuary on the roof, all the stained glass.  The architect did not even try to make a Gothic cathedral but rather a neo-Gothic one as in Washington DC.  We did not go into this travesty at all.  But the Musee de Moyen Ages, housed in a former abbey, is amazing.  Everything is broken, but someone had picked up enough fractured treasure to fill the mind with wonder at its beauty and grief at its destruction.  This museum is very close to Universite de Sorbonnne and Montmartre Church, but we did not go to either. 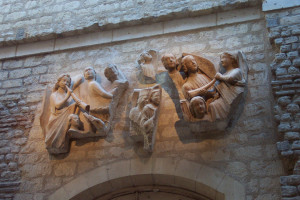 It is very expensive to eat in Paris.  Even the waiters receive a “living wage”.  I am sure that there is fine dining to be had, but workaday fare is scarce.  The French themselves tend to snack at a bistro after work, with an adult beverage, and then go home to dinner.  Word is that men keep their mistresses in town [sex, bistro and wine] and their wives in the suburbs [dinner, no sex].  We could not even find a market to buy bread, fruit and cheese, which is our usual for a light supper and for breakfast!  So we often joined the youth at McDonald’s, where people would be in line out the door for inexpensive food.
One evening, we left the Louvre, exhausted, and sat in the sun in the Tuilleries Gardens.  The palace that Josephine lived in is gone, and the gardens are now open to the public.  There are wide paths, fountains and chairs everywhere.  The chairs are nice ones, and not chained down.  People can move them anywhere they want, but no one steals them.  As we watched, a young boy sailed a toy sailboat on the waters of the fountain.  He could run around to the other side to retrieve it.  We could see the edifice of the D’Orsay Modern Art Museum across the river.  We never did make it there, though it is high on my list if we ever return.  At the time, I was not interested in any art past 1800 or so, but I have since become much more educated.  To the west, framed in the setting sun, was the Arche de Triomphe of Napoleon, which the Parisians went ahead and finished long after his disgrace and death.  There are mixed feelings about N in France.  There are moments in one’s life that are so perfect they can be called to mind in entirety, right down to the smells and sounds.  This is one of those times for me.
On another day, we took a combo river cruise / bus tour.  The Seine is the world’s most scenic river [we have seen many; London is finally getting there] and is well loved by Parisians.  They keep it clean, though it is thronged with boat traffic.  The wide embankments are always busy with people day and night, but there is little garbage left there.  All the famous sites face the river and a cruise is a MUST.  The bus tour took us to around the Arche, the Opera, the Gare [train station].  The Eiffel Tower stands right where the boat ride ended.  This other MUST in Paris is an engineering feat, with slanted elevators climbing the legs to the first platform and smaller cars riding up the central column.  The top platform is caged in wire so you can’t fall off; you just think you are going to.  In all the photos of me I look terrified because I was.  On the mid-platform, we bought crepes, which turned out to be just like Hungry Jack pancakes, but with sweet lemon juice poured on.  We walked around the massive park at the base of the tower but did not make it as far as Napoleon’s tomb.  We did see a man-powered carousel on which the children jousted for the iron rings that allow them to ride again.  The man cranking the thing did not seem to understand why I took so many pictures. 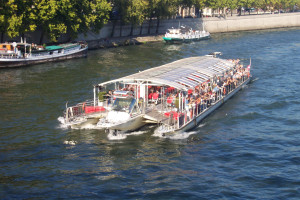 The view from the cruise [Notre Dame] 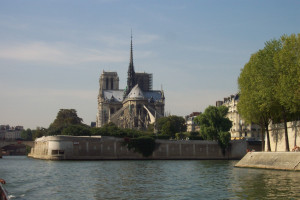 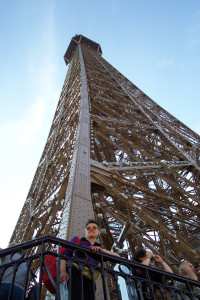 Our one trip out of town was to Chartres Cathedral.  We always try to take a trip outside whatever city we visit to get a feel for the countryside.  Just outside Paris are farmlands surrounded manufacturing plants.  Nuclear power plants dot the fields.
Chartres Cathedral 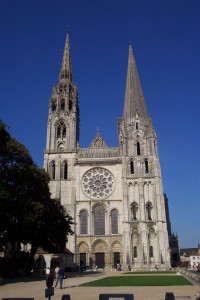 In the Middle Ages, the first person to spot the destination of a pilgrimage would shout “I am the King!” giving rise to all the plain folks with names like Rex, King, and Leroy.  Ron and I had scored the front seats on the second deck of the tour bus and this Ron called “King” when he saw the cathedral perched on its hill above the small town and farm fields.  [A note here: when we got back to the bus after seeing the church, everyone went back to the seats they had occupied before.  Nobody grabbed our seats.  This amazed me].
Chartres is everything Notre Dame is not.  It has its original stained glass, featuring a blue that no one can reproduce.  The monks had buried it during the Revolution and again in the 2 world wars.  When I tell you that I said, “Oh my God,” when I entered the cathedral, be reassured I meant it as a prayer.  The whole fabric of the building is original; it still has its chapter house [round room where the monks met to conduct business]; the different entrances are of different time frames so you can see how the whole evolved.  Sadly, the famous tile maze set in the floor was covered with chairs; I was quite disappointed.  Walking the maze while praying was a mini-pilgrimage in its day.  The village around Chartres was still medieval-small—a rabbit warren of narrow streets and sloping houses.
Many years later, we had a 18 hour layover on our way from Italy and we chose to spend it in Paris.  Ron found us an even tinier room, without bath.  It had a bidet and a sink.  Its tiny balcony looked over the first street back from the Seine.  Our main goal was the Isle de St. Louis [pronounced San Looee], the smaller of the 2 islands in the river.  St. Louis has a marvelous bistro overlooking the back of Notre Dame and the river, called La Brasserie de Isle de St. Louis.  They serve a most wonderful cassoulet [bean casserole]; I had omelette fromage and pommes frites.  We had discovered this place on our first visit.  This time we sat with a lady just back from the Royal Wedding in England.  The Isle de St. Louis is accounted the most expensive real estate in the world; she was staying with friends.  We all listened to a man playing on an accordion.  He was packing up for the night, but Ron gave him €2 tip and he decided to continue with a few more songs.  At midnight we were walking back to our pied-a-terre [literally, foot to earth, meaning apartment in the city when you have a house out of town], having spent “April in Paris”—well, the last 5 hours of April anyway. 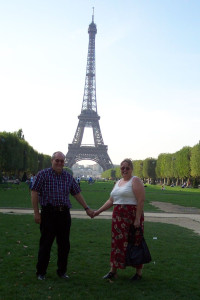