Due to our exhaustion from mitigated happiness, and intense church work since September, we ran away from home to get lost in Paradise.  Since all those cruise-related worker bees have to earn their living, someone must foot the bill.  It fell to us.

Now we like cruising very much, but we are not foamers².  We have now defined ourselves as people who like any form of transportation as long as we are going somewhere.  The beauty of a cruise is the “unpack once and sleep between ports” aspect.  We are not especially drawn to the food [usually excellent]; the entertainment [variable]; the gambling [futile]; or the raucous humiliating games [excruciating].

In fact, this trip, on Grandeur of the Seas, Royal Caribbean allowed us to check in early [10 am—we got there at 10:30 when the first rush was over.]  No cabins were yet available but all the public areas were open.  We had come prepared with swimsuits in our carry-ons, but were simply too tired.  So we got diet cokes [we indulge in the all-you-can-drink deal], sat in some lovely deck chairs and read out Nook-books.  Later, I made this true to life sketch of the harbor.  Note the accurately drawn cars in the parking lot.  If you look closely, you can tell the make and model and read the license plates. 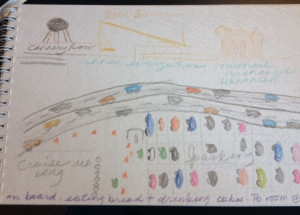 Grandeur of the Seas is one of the smaller cruise ships we’ve been on.  Only 30% of the cabins have balconies.  With the newer larger ships the % is much higher.  We had a balcony, however, finding it always worth the extra $$ for the privacy and the views.  We need not rush to the top decks to watch comings and goings.  In this case, we could watch the Coast Guard as they escorted us in 2 small gunboats, all the way to the ocean, the length of the Chesapeake Bay.

I simply could not get enough sleep and Ron was also tired, so as soon as we could go to our cabin, we did so: unpacked [we both love the moving in and our process = organizing] and took a nap.  We had a late lunch at the Trough. ³

Days of sleep at sea.
We passed roughly 48 hours at sea, reading, napping; eating breakfast and dinner in the dining room [Great Gatsby theme.  One of the nicer, pleasingly less flamboyant decors we’ve seen.]  This voyage, we had choose-your- own- dining time.  Most cruises, you are assigned to 1 of 2 seatings and they schedule the entertainment accordingly.  But we liked scheduling our dinner according to our plans; we very much enjoy the fine dining experience.  It is a more controlled environment than the Trough ³ and allows a bit of adventure in eating.  For example, Ron had escargots several times.

We generally eschew the entertainment as the shows in the auditorium are usually too loud and too late.  We discovered on our very last day that they simulcast the shows to the staterooms!  There are 3-4 entertainment groups typically, including the stage “stars” who are generally quite professional.  We usually find one other act we like, drink a bit and dance a bit, but with my heel spur, we couldn’t dance.  But on the return voyage, the ship hosted a trio of aerialists, along the lines of Cirque du Soleil.  We had noted unusual equipment in the Centrum [indoor common room of the ship, open on all floors] but didn’t find out its use till Day 8 of the cruise.  We lined up early on the balcony rails—every floor has a lounge overlooking the Centrum], ordered drinks and read till show time.  Colored lights flashed around the balconies while Vivaldi’s “4 Seasons” played; we could just see the performers getting wired up.  There was a pas-de-deux in 3-D with the dancers “floating” in a ring within a ring circled each other.  Then came a male solo and finally bungee diving from 3 velvet swings, strewing fall leaves.  Each with different costumes and accompanied by the ship’s stars singing seasonal songs, cleverly costumed.  Two days later there was another brief show by the aerialists featuring the female climbing within and without a 20’ golden sun-frame. 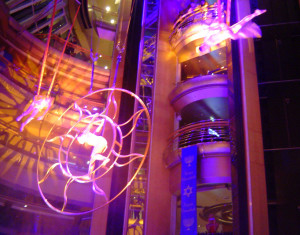 The return voyage was like the trip out except the days I spent in a wheelchair.  But that story is for another day.

N4 89 Baltimore - Caribbean edition
² I don’t know why my computer starts with 2.  Foamers are those who foam at the mouth with excitement at the very thought of a train; they know inordinate amounts of information about their beloveds.  Whereas we like trains very much and love to ride on them, we are not foamers.
³ The Trough is my name for the all you can eat buffet on ship or shore.  I have real issues with a trough and my inner pig squeals to be released.
Our website www.bucklesfamily.net shows pictures and has a sign-up for our guest room.
www.carolbuckles.livejournal.com for my blog
Baltimore to Haiti: 1208 nautical miles
Distance to San Juan: 1580 n.m.
Distance to St Thomas: 1670 n.m.
Distance to St Martin: 1786 n.m.
Total distance: 3253 n.m.
or 3743 human miles.
Tags: new newport news news
Subscribe