Re-energized from all our naps and fine dining, we were ready to go ashore at Haiti, aka Ayiti.  Mind you, Haiti does not show up in any of the Caribbean guidebooks and is grayed out on the tourist maps, but we docked anyway.

Royal Caribbean owns a goodly chunk of a peninsula [as several of the cruise lines do] and it was there we docked.  The nicest part of this arrangement is that our coke deal applied there, and lunch was an included buffet on the beach.  They call their port of call Labadee, which I always thought was meant to be Lahdidah.  As we docked, all the jet skis and the parasail boat passed in review, which we watched from our balcony. 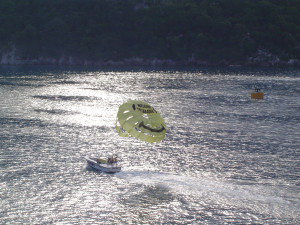 Parasail boat :-)
This whole cruise was set up for geriatrics, the halt and the lame.  Balloon tire wheelchairs could whisk you down the long pier to the center of things.  At this time of the trip we were hale and hearty, though staggering a bit from the lack of the ship’s rock and roll.  Ron went off to his Cultural Tour and I walked around the beautifully made concrete, coral and shell pathways, leading all over the facilities.  I also did a long walk beachcombing, picking up long-dead finger and brain coral fragments, along beautiful white, but coarse sand, made of tiny shell and coral bits pulverized by the sea.  Many folk were ‘camping’ in free beach loungers, whilst a very few were zip-lining.  I went through a couple of cokes listening to gossip and thoroughly enjoying myself. 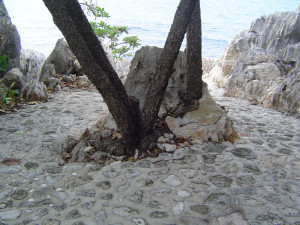 Shell and coral pathway
From Ron:
The Culture Tour takes place at an abandoned village one bay over from Labadee, on the Haiti mainland. I did not see any roads or vehicles, so the only way there seems to be by boat.  There were about 25 of us and we went over on a catamaran of about 30 ft., with the lady guide talking the whole way.  Once in the bay we had to wade from the boat to the private beach in knee deep water. After a brief stop for bathroom (flush toilet fed by a rain barrel) and refreshments (one free) we headed up the hill.  A male guide took over. In the tour we learned about native plants and fruits, traditional house building, wood sawing (with a pit saw), basket weaving, making peanut butter, coffee roasting (with pedestal grinding), general cooking, cassava baking (yum!), music and art. I bought a nice wood bowl with all the money I had: $15. 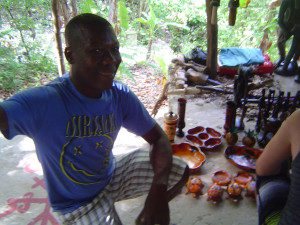 Then we had an hour on the private beach where I just lay in the shade and enjoyed the peace. 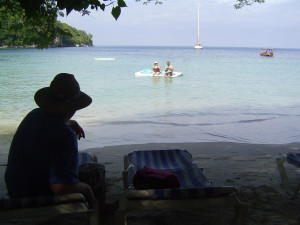 Back to Carol:
When it was time for my snorkel adventure, I struck up a conversation with a charming gentleman, as most of the tourists were couples.  His wife was still aboard ship!  About 30 folks boarded the dive boat, with our guide—one of the skinniest yet healthy looking person I’ve ever seen.  Like Twiggy.  He was a white, native Haitian, well-educated and knowledgeable.

Snorkeling is most amazing!  I have one of the new, less leaky snorkels, but I need to use my magnifying goggles to see anything at all.  This means I have to hold my nose, but I can do that [the nose-holding clips don’t work as well as fingers.]  The boat provided all the equipment, but all I needed was the safety float vest and flippers.  These were cut into 2 “toes” which made swimming slower I thought, but ok.  I set off following a guide, who fed the fish to attract them.  I really couldn’t keep up, though, and I had a leaky eyepiece, so I stayed around the boat, circling the reefs and terrorizing little fishes.  Ron had bought us an underwater one-use camera, so I’ll add those photos later [if any come out].  There was a big guy circling around us in a kayak in case us geriatrics got swamped and, indeed, one lady hitched a ride back to the dive boat.

[This is disconcerting to write, as I watch the snow flurries out the window.]  The waters of the bay in Haiti were cool and the sun was hot, making for a very pleasant average.

After an hour, we were all gathered back to the boat and served rum punch.  Not necessarily re-hydrating, but very pleasant indeed.  Off the beam, there were fisher men, 2 to a boat, standing with one oar each.  A rag-tag boat load of small boys reminded me of the Haitians who set out in hopes of reaching Florida only to be turned away.

Ron was waiting for me when I got to shore and we set off walking about the island.  The line to go through security back to the ship was very long; we figured that those folks hadn’t realized that lunch was part of the deal—or were worn out by their adventures.  But we were not done in yet.

We had the aforementioned buffet, combed the beach a bit, and lay about in lounge chairs watching the sea. We discovered Dragon Rock overlook, where the soughing of the sea is amplified by the tumbled volcanic rocks to sound very like giant, husky breathing.  On the way to the rocks, I found a whole purple fan coral on the beach [which I managed to bring home!  It spent the entire rest of the cruise drying and de-stinkifying on our balcony.  We also spotted a hermit crab. 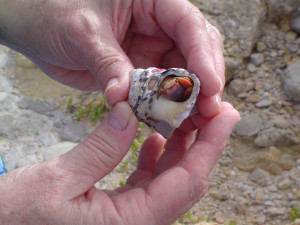 We wandered over the rocky hills on the very scenic pathways.  I spotted a large space-age building I hadn’t noticed before and was amused to find out it was the upper decks of our ship!   We saw lizards abounding over the sharp water-cut rocks and 2 sizes of mourning doves.  Trees with many exposed roots dug these into the rocks, gradually making soil from them. The great rocky cliffs were catching moist clouds off the ocean and raking the rain from them.  I think I saw a few little green parrots. 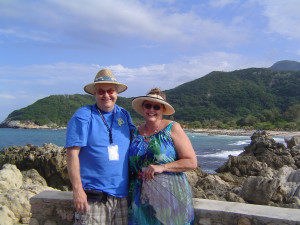 [note the fan coral in my hand].

We boarded the ship, cleaned up and had dinner as the ship sailed.  Just another day in Paradise.


N4 90 Baltimore - Caribbean edition
² I don’t know why my computer starts with 2.  Foamers are those who foam at the mouth with excitement at the very thought of a train; they know inordinate amounts of information about their beloveds.  Whereas we like trains very much and love to ride on them, we are not foamers.
³ The Trough is my name for the all you can eat buffet on ship or shore.  I have real issues with a trough and my inner pig squeals to be released.
Our website www.bucklesfamily.net shows pictures and has a sign-up for our guest room.
www.carolbuckles.livejournal.com for my blog