With my knee a mess, I tried to encourage Ron to go ashore without me.  Ron, being Ron, figured out that with as many oldsters on the ship as we had that cruise, there must be handicrippled tours.  And it was so.

They even had 2 openings.

We were also able to rent a 3-wheel buggie-wheelie-scooter, with speeds from Turtle to Rabbit.  Ron finds these buggies appealing and looks forward to needing one, but there I was.

I am a terrible driver and stayed on turtle.  I had to drive my buggy onto a lift to get into the bus.  JamesBrown, our clever and resourceful jack of all trades, directed me and then strapped the buggy into place.  There was another buggy-lady aboard who was used to hers –our driver ShyJasmine called her “my partner in crime”--and a couple from Russia whom ShyJasmine called “Mr. & Mrs. Mafia.”  Ron and I were both named “troublemakers.”  Wonder why?

ShyJasmine and JamesBrown  [always said as 1 word] kept up the most intoxicating repartee the whole trip, though she said she sometimes would get a busload who were completely deadpan.  ShyJasmine said that St. Maarten/Martin was called The Friendly Island; if she and JamesBrown are typical, then it is a rollicking good place.

The island has two names because it is two countries: France and Netherlands.  There are several stories about how the actual division took place, but it has created a fascinating study in Balkanization.  ShyJasmine was from the French side and JamesBrown from the Dutch.  So part of their chitchat was friendly rivalry.  They also said that to call the other half of the island is long distance—it is much cheaper to call the US!  What interested me was that the taxes being very high on the French side why anyone still lived there.  The Dutch side was very US, with booming resorts and casinos; shopping malls and beer; and it faces the Caribbean Sea.  The French side was exclusive and reclusive resorts; nude beaches and wine; and it faces the Atlantic Ocean.

ShyJasmine asked, “What did the Atlantic say when it met the Caribbean?”
Ron: “Pass the salt” ?
Carol: “I sea you” ?
“No, they said nothing, just waved.”


Other than iguanas, the island has no wild animals.  We had 2 animal stops on the tour.  First, was a small bay where a gentleman makes his business bringing up sea critters to show to tourists.  JamesBrown brought both black and white sea urchins; a sand dollar [I’d never seen a live one before; there are spiky like urchins]; and a conch onto the bus and let us handicrippleds hold them, while the able bodied got off the bus.  A later stop was to see 30+ iguanas by the roadside “herded” by a man who regularly feeds and waters them for photo ops.  He also sold conch shells and we bought one for our granddaughter.  As we drove, we saw countless iguanas in the treetops by the road.  They grow up to 6’, we were told. 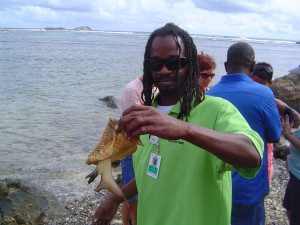 JamesBrown and a conch 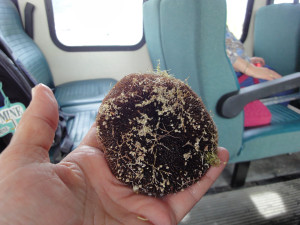 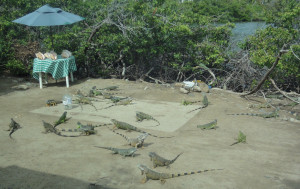 ShyJasmine told us that in 1995 Hurricane Luis, a category 5, sat on the island and ruined the saltpans, shrimp harvest and several resorts.  Recovery is slow and the French resorts especially were being rebuilt into timeshares and condos.  There remains an oil tanker wrecked on the beach. 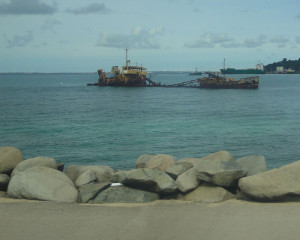 No crops are grown on the island; wild crabapples are harvested, but almost all other food and supplies are imported.  Drinking water comes from a desalinization plant.  Apparently the tourist industry and salt have been enough to keep the economy rolling.

We made our way to Marigot [do not pronounce the “t”], as beautiful seaside town, where we got out the wheelie-buggies and zoomed around town for an hour.  Ron and I worked our way through a covered flea market, where we found a number of interesting things, including a tagua nut [= vegetable ivory.  It is a nut that, after treatment, can be carved like ivory.  I just wanted the nut.]  Very reasonable prices, too, for a good variety of stuff in among the tons of CTC³. 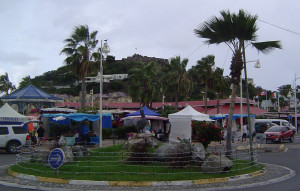 Ron and I then ate dried-fruit tarts at a French café and made our way back to the bus.  Once on board, we discovered that another tour bus had blocked us in.  So JamesBrown blithely went to the other bus and drove it out of the way; moved us; and then parked the other.

ShyJasmine asked if we wanted to see the airport, famous for the low approach right over the beach.  We were quite pleased, as this was on our to-do list before my injury.  Being on the bus was MUCH better than our plan, as the whole beach was jammed with tourists—SRO! 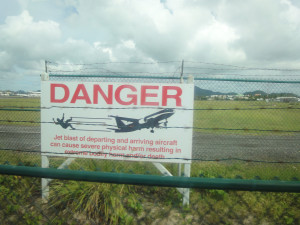 JamesBrown and ShyJasmine had us laughing all the way back to the ship, passing a number of traffic roundabouts featuring fine bronzes: pelicans; salt pickers; freeman with broken chains. 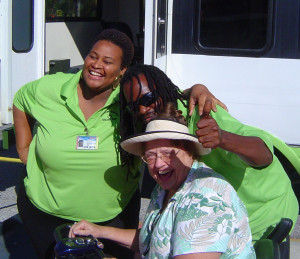 The broken chains—symbolic of a people freed by Napoleon and re-enslaved when he fell from power.  People led by 2 wildly different countries in Europe in strangely remaining 19th century colonialism.  A people who have survived without water or crops—and thriving.  A tough, resilient people who have made a decision to be The Friendly Island, against all odds.

N4 93 Baltimore - Caribbean edition
ª Foamers are those who foam at the mouth with excitement at the very thought of a train; they know inordinate amounts of information about their beloveds.  Whereas we like trains very much and love to ride on them, we are not foamers.
² The Trough is my name for the all you can eat buffet on ship or shore.  I have real issues with a trough and my inner pig squeals to be released.
³ CTC is cheap tourist crap
Our website www.bucklesfamily.net shows pictures and has a sign-up for our guest room.
www.carolbuckles.livejournal.com for my blog
Baltimore to Haiti: 1208 nautical miles
Distance to San Juan: 1580 n.m.
Distance to St Thomas: 1670 n.m.
Distance to St Martin: 1786 n.m.
Total distance: 3253 n.m.
or 3743 human miles.
Subscribe