First off, we have not returned to Russia, nor are likely to.  This Hermitage is in Norfolk VA, not St. Petersburg.
I think it likely that the owner, Mrs.Florence Sloane, whose ‘summer cottage’ this was, named it after Catherine the Great’s ‘summer cottage’ in Russia.  Both had an avid collector’s heart for art, both fine and decorative.
We undertook the perilous journey to Norfolk on a Friday, and by grace passed the test of water and the test of traffic.  Did you know that the Hampton Roads Bridge-Tunnel¹ is UNDERWATER??  Well, the tunnel part anyway.  It is enough to make Willoughby Spit. ²
The Hermitage is a hidden treasure in Norfolk [7637 North Shore Road] seemingly in an upscale neighborhood, but as you pull through the gates, you realize the size of the grounds [some 22 acres].

We had gone to see a complete set [about 40]of Japanese color woodcut prints, “The Road to Hakkaido”, [a famous pilgrim’s route in Japan]; this was laid out in several rooms and the interconnecting hallway, so the viewer really went on a pilgrimage to see the whole set.  Nobody owns a full set, so these were on loan from various museums. [This exhibit is currently at the College William and Mary.]  The astute viewer could see those which were first off the presses and those which were later.  Even I could see this.
. 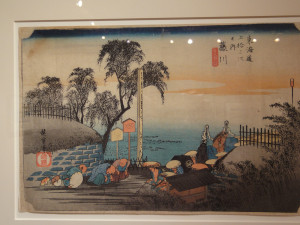 Accompanying this exhibit was a roomful of works by Andrea Willliams.  She takes motifs from Japanese woodcuts and renders them in natural stone inlaid with gold and silver.  The inlay is so fine it looks like the whole thing might be cast resin, but it is the most amazingly delicate work.  And low and behold, I received a necklace for Christmas from this artist!!!
Downstairs are paintings, furniture, statuary, tending toward Russian works.  The house itself is a jewel, with many nifty architectural features and an incomparable view of Hampton Roads from the front of the house.  Even better than my view from the dining room, if you can imagine that. 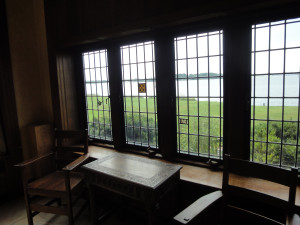 The gardens are outstanding, with many native plants and garden “rooms” for chats or reading. 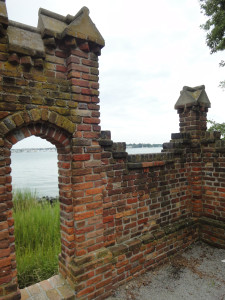 We were there in August, so I helped myself to some seed pods, leaving plenty for the wild to eat.  Along the shoreline, a do-gooder group is replanting, in an attempt to keep the Roads from eating the property.  I know that feeling as well.

N4 85 Hermitage edition   8/22/14
¹ Hampton Roads Bridge-Tunnel [—we call it the Herbert in memory of my father]
² Willoughby Spit is a tiny sand peninsula covered with expensive homes.
http://www.thehermitagemuseum.org/collections-exhibitions/sloane-collection-0
Our website www.bucklesfamily.net shows pictures and has a sign-up for our guest room.
www.carolbuckles.livejournal.com for my blog
Subscribe