Breakfast at the Royal Olympic Hotel in Athens Greece is a gob-smacking moment.  As you exit the elevator and walk onto the open air rooftop, you see the Parthenon atop the Acropolis, fairly glittering in the morning air; Lycabettus Hill with its monastery; the ruined Temple to Olympian Zeus and Hadrian’s Arch; and away to the distant mountains [including the open face of the marble quarry that built the temples].  And the food was also quite good for a Trough: lots of breads, several kinds of eggs, meat and cheese, yoghurt, cereal and fruit.  My favorite was a traditional Greek-Turkish bread ring with sesame seeds all over it.
We must credit The Great Courses’ Professor Hale for the idea of the Walk Around the Rock. [http://www.thegreatcourses.com/courses/great-tours-greece-and-turkey-from-athens-to-istanbul.html]  So, following his suggestions and armed with a map, we visited Hadrian and Zeus first.  Roman Emperor Hadrian ruled from 117-138 AD [https://en.wikipedia.org/wiki/Hadrian], spending most of his time touring the Empire.  Most of our trips in the last 15 years have been in his footsteps, and not by design.  He simply went everywhere that was interesting to go.  He was a devotee of everything Greek and spent vast amounts of treasure on rebuilding Athens [and other Greek places].  His arch in Athens reads [on the Acropolis side] “This is the city of Theseus.”  And on the other, “This is the city of Hadrian.” 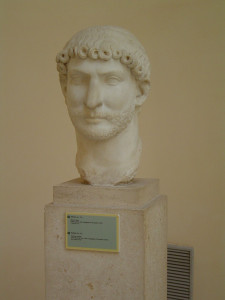 His largesse built the Temple of Olympian Zeus.  It had been started in Classic times, but was far too ambitious, as it was to be larger than the Parthenon, which already stretched technology of its day.  All that remains are several columns, which have been re-erected in modern times after an earthquake 100s of years ago.  The interesting thing—very instructive—was how the columns fell; this allowed modern workers to see how the columns were assembled in the first place.  Imagine a carrot, sliced into circles.  You stack up the circles in descending size, joining them together with wood dowels.  Lastly, you carve flutes or channels down the length.  The columns then support marble lintels resting on decorative, inverted V capitals; the lintels support the pediment / roof.  The wood plugs in the columns are somewhat flexible in earthquakes, but on the whole most temples of this type fall down due to the enormous weight of the stone roof.
This site allowed us to purchase multi-site tickets for a bargain price; and we greatly enjoyed taking photos of the feral cats.  And the Roman houses and baths.
Leaving the cats temple, we passed the statue honoring Melina Mercouri.  As Arts Minister in the 70s, she led the fight for the Elgin Marbles to be returned to Greece from the British Museum.  I am going to state my opinion of this controversy, as I consider myself to be a pragmatist.  IMO, Lord Elgin saved the fragmented marble statues of the Parthenon from being burned to make mortar.  He did not steal them, but was given them by the Turkish governor in charge.  He shipped them in bits to Britain and ultimately gave them to the British Museum for conservation.  Millions of people have viewed the marbles.  Greece had no way to care for these statues in the 1820s when he removed them and, indeed, had no building ready for them until 2000.  Mercouri argued that any elements of a building belong with that building, in the country of origin.  But, in fact, the Athens Archaeological Museum has collected ancient treasures from all over Greece to display and has returned none to their original sites.  What’s good for the goose, Ms. Mercouri….
Sorry about the soapbox moment.
Our next stop was the monument to Lysicrates, who won a contest in 320 BC for sponsoring [being a choreogas = producer] a song telling the tale of Dionysis, who, beset by pirates, turns them into dolphins.  Wealthy men were expected to sponsor expensive events and then laud themselves with public works.
We shopped a bit through the Plaka [shopping district of mostly CTC].  We had a strict weight limit this trip, as our island transportation had a 44, not 50 lb limit.  We left home at about 35 lbs and small suitcases, so it was actually fun searching for very lightweight items to bring to family.
We took a break next to the Acropolis Metro station, at an outdoor café [the first of many] and then Ron went down to buy all-day-passes for our adventure the next day.
Moving west toward the Acropolis, we cut through the grounds of the Parthenon Museum, where many of the archaeological finds from the building of the museum are on display under glass; you “float” over the Roman-era ruins.  There are other similar displays all over Athens: in metro stations, construction sites and roadways.  Conservationists are finding ways to allow modern life to proceed without erasing the works of the past.
Soon, we were on the Grand Promenade, another innovation for the 2000 Olympics.  Supposedly a pedestrian walkway [but used by motorcycles and small vehicles to the hazard of all], it is made of cobblestones and quite wide.  It takes you beneath the southern edge of the Acropolis, beside the Theatre of Dionysis [Classic Greek era] and the Odeon of Herodes Atticus [era of Hadrian].  But, as we have “done” the Acropolis in the past, we followed the Prom toward the west and to the Hill of the Nymphs.  We paused at the site of the Dipylon Gate, which used to lead onto the Sacred Way; made use of a gorgeous stone-built restroom, which turned out to be absolutely filthy inside, but “any pot in a storm,” I always say.
Climbing and climbing, we reached the Pnyx, the “place of the crowd.”  This is the place where the Athenian free men met to exercise the first democracy in the world.  Something like 10,000 men used to gather to decide important issues including war and peace, ostracism and taxes.  The beauty of democracy IMO is that it is very difficult to get anything decided and therefore conservatism usually wins the day.  The downside, of course, is that the mob rules and the minority are oppressed.  And in Athens' case, women and slaves were never heard.  The Bema [platform for the speakers] was carved from the living rock of the cliff-face, which helped throw the speakers’ voice toward the crowd. 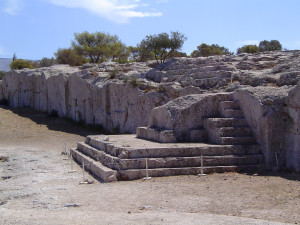 In view from the Pnyx were the Acropolis [worship] and the Areopagus [council of elders].  We descended the Pnyx, hearing the caws of the magpies arguing like politicians.
Back to the Prom and thence we climbed the Areopagus [Mars Hill] where the Apostle Paul addressed the elders of the city.  He had seen a monument to “The Unknown God” in the Agora and was eager to tell about GOD, revealed to Paul through Jesus Christ.  They said, “Sure, Paul, we’ll be glad to add your god to our pantheon.”
But the signs on the craggy, wind-pounded rock discussed his converts, not his nay-sayers, which added a more optimistic slant than Luke wrote in Acts, where he reports that Paul left in disgust.
The original stone-carved steps are still there and many folks climbed that way.  We touched them for Paul’s sake, but preferred to climb the modern steel staircase with handrails rather than these time-worn and slippery steps.  We had a nearer-to-God moment when some enthusiastic young tourists nearly bowled Ron right off the cliff. 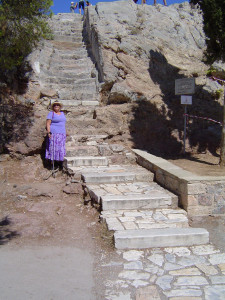 Descending Mars Hill put us on the Apostolos Pavlou [Apostle Paul] Street where we bought a hand-made-on-the-spot macramé owl necklace from the artist.  This was our homage to Athena’s sacred bird.
Faint of heart—well, hungry—we found a street-side café with wonderful cushioned rattan loveseats.  We consumed the best French fries I’ve had since Paris and 2 carafes of fresh OJ [and other yummies].
Thus fortified, we crossed over a railroad on a bridge made entirely from graffiti to the ancient Keramikos District.  Athens was famous for their clay pottery long before the Classic Age, when the famous red- and black-ware were carried around the world with wine and olive oil.  The pots, though handsome, were never considered valuable until the 19th century, when men like Hamilton and Keats brought them to public notice.
I wonder if it is a coincidence that the ceramic workers district was built on an ancient cemetery.  I read a mystery story once where the murder victim was disposed of in the artists’ clay, where upon they made their most gorgeous pots ever.
The small archaeological museum of the cemetery was quite good and we mooned around the remaining monuments still in situ.
Retracing our steps to the RR bridge, I heard the train coming and saw Ron poised with his camera, waiting for the shot…but the train went by unphoto’d!  I then looked up enough to realize he was shooting the Parthenon with just the perfect sun rays. 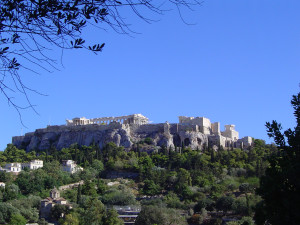 From there, we walked to the ancient  Agora, of which I am terrified.  After all “fear of the open marketplace” is what agoraphobia means literally.  Well, I might be a mite anxious…. 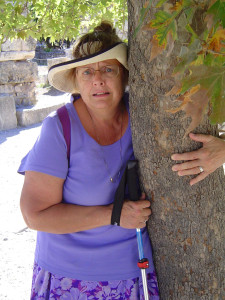 Most of the Agora is in such ruins that it looks like a tumble of eroded stones.  On a hill overlooking the place, though, is one of the most complete Doric temples in Greece [on a Tuesday], the Temple of Hephaistos.  It is in such good shape because in the 7th cent. AD, it became a church dedicated to St. George.  The climb up to the temple was precarious, on those ancient marble-carved steps beloved of the ancients, but it was worth seeing; not only the temple itself, but the first evidence of landscape architecture.  When excavating, scientists found where trees had been planted in antiquity mirroring the row of roof-supporting columns.  [sorry, you can't see those trees from here.] 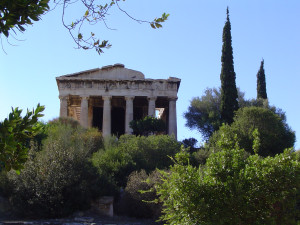 Returning down to the Agora—yes, Athens is a very hilly place—we headed back toward the ancient Agora, where John D. Rockefeller paid to rebuild oen of the Stoas, which were long, columned marketplace buildings, usually 2 storeys, and filled with merchandise of all kinds.  Philosophers used to meet on the 30 feet deep porticos of these buildings, earning their name of “Stoics.”  This Stoa is a museum, featuring 3000 years of Athenian pottery, including a child’s potty chair and a statue of Voldemort.  Well, probably someone else, but time had eroded the face / nose to look like he who should not be mentioned.  Somewhere along here, I lost my camera and have no pictures to show of these 2 items. 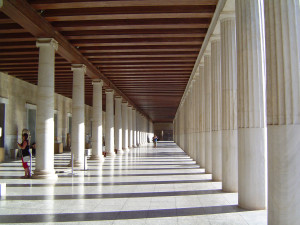 Across a lane, there was a large agora which had been dedicated to Demeter.  This section went right up another hill and my pig-feet refused to climb.
“I’ve been thrown out of better agoras that this,” I said.

Across the stretch of Roman Agora, we saw the Temple of the Winds, a lovely octagonal monument, with the 8 winds carved on each facet and sundials sprouting from all sides.  It is a reminder that the folks who built it were sea traders dependent on which way the wind blows.  My favorite is Lips, the wind of spring, bringing flowers.  But you all know Boreas, the cold north wind for whom the Aurora Borealis is named. 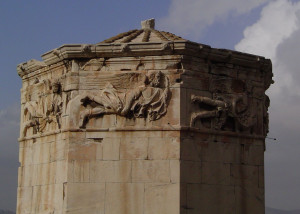 And we strolled staggered back to our hotel through the Plaka [CTC], footsore but triumphant.  The day had stayed 82° with 25% humidity and a steady breeze.
We went to our nearby market, where we got water and cookies, but the only tape they had was masking or packing.  So my daily journal has brown gobbets of tape rather than nice magic tape.  The search for decent tape became a saga....