Still Sept. 21st we boarded the bus for Piraeus, which, note, uses every vowel but O.  Piraeus is the port of Athens and has been so throughout history.  Athens is built defensively on hilltops rather than right on the sea; but with its splendid navy and trade network, the city-state had to have an outlet.  In fact in Classical Athens, the entire cities of Athens and Piraeus and the road in between were walled, lest an enemy cut Athens off from supplies.  The word “Piraeus” simply means “port”.

Nowadays, there is scarce a break in urbanity between Piraeus and Athens, and there is an Ikea about midway.  Coming as we were from Eleusis, however, we crossed a sizeable mountain topped by what looked like several miles of an abandoned military base complete with watchtowers.  Although there could well have been activity going on below the crest of the mountain that we could not see.

We debussed right at the main port amid incredible confusion, with the cruise ships and ferries disembarking 100s of people with their luggage, dogs, cars, children etc.  Walking along the port fence, Ron spotted the right bus we needed and we hot-footed it [well, he did.  My feet may be hot but are no longer swift.  But the driver waited for me.]

The museum in Piraeus is small and nondescript on the outside, but is a treasure trove on the inside!  Utterly stunning, in fact.  But, alas, no guide book.

On the entry floor is a large room containing a monumental tomb thought to be inspired by the original world-wonder Mausoleum in Turkey.  Specifically both are a wedding cake assemblages with layer upon layer covered with statuary and embellishments.  The Mausoleum was huge; this one modest, with a marvelous frieze of Amazon women fighting a bunch of naked guys [about ½ life size]. 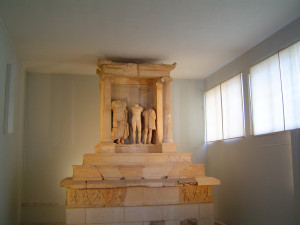 But upstairs!!  We bounced from one wonder to another:
·         An actual bronze trireme ram and stone ship’s eye.  The ram was mounted to the ship's bow at water level to crash into other ships.  The eye helped the ship to see where it was going.  Many small boats in the Mediterranean still have painted eyes. 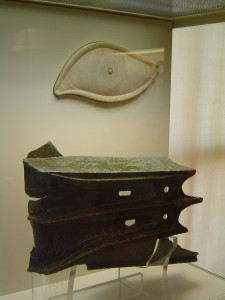 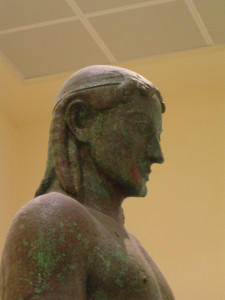 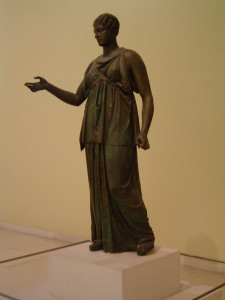 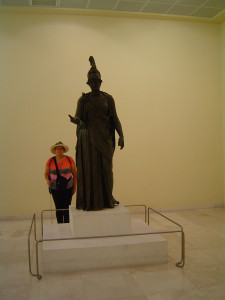 ·         A wood, yes wood, coffin [I didn’t write down the date, but it was really old]
·         A case of tiny Minoan [16th century BC] votary offering figurines, and a series of arms and legs.  These must have been tokens to the gods for healing.
·         A room of burial goods
o   Bronze fish hooks
o   A funeral urn for cremains with the man’s sword bent around the top
o   Bronze medical instruments [yikes] 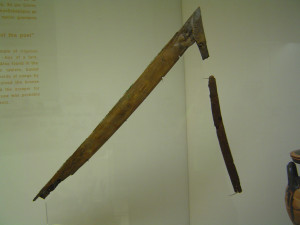 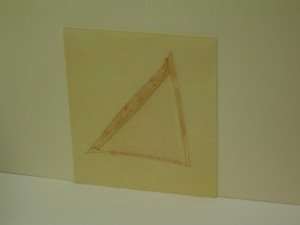 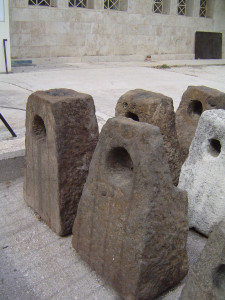 Then we went back and looked at all the bronze statues again.  There is simply nothing in the world as fine as a well-made bronze statue.  The details are meticulous and beautifully modelled.  Bronze is a warmer medium than marble and, since it doesn’t wear down, the details are crisper.  These bronzes are still in Piraeus because the shipwreck that contained them was lost off their waters.  And apparently, local sites are increasingly allowed to keep local finds, whereas they used to be taken to Athens.  But this is a double edged sword, as
·         so few people bother to stay in Piraeus off the cruise ships
·         and fewer make their way there on purpose as we did
There might have been 20 people in the whole museum and about that many staff.

Famished, we asked the museum folks where they might go to eat and they recommended a place right down the street.  Walking there, we encountered the fattest beagle dog I have ever seen, making his way along the sidewalk.
The Tasty Corner [ΓΕΥΣΤΙΚΗ ΓΩΝΙΑ] is not on a corner, but is a wonderful gyro, fast-food place with lots of sidewalk tables with umbrellas.  For €30 [about $30, which is a lot for lunch], we had huge portions of pork gyros with tomatoes, potatoes sliced very thin and crisply fried, ditto zucchini,  followed by on-the-house pound cake soaked in honey syrup.  As we were blissfully consuming, the fat dog showed up.  Everyone knew Max by name and offered him his share, at each restaurant along the street; and by his girth, probably every restaurant in town.  Replete, he lay down in the center of the sidewalk to sleep it off. 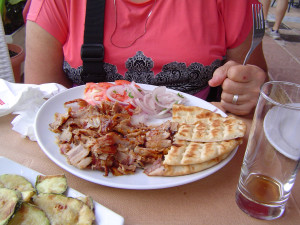 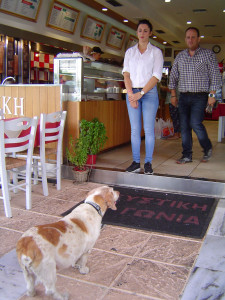 Taking half our gyro meat with us, we bussed back to Athens at a slow slog through traffic.  In our hotel, we cleaned up and fell horizontal, watching a “Poirot” episode in English with Greek subtitles.  Some day we’ll have to see who-done-it, as well fell asleep during the first 30 minutes.