I have never been a sports fan.  I like to do stuff, but not watch.  So, the Olympic Games are not compelling for me, but it was quite a wonder to visit where the Games began.

I simply could not keep up with our guide Yianni and the rest of the group.  This time, sweet Ron escorted me around and still took pictures.  We were glad that we had studied so hard before going on this trip, so that we could guide ourselves.  The signage at Olympia was also quite good.

We went straight to the stadion [Latin, stadium], which refers to the length of the race course ; that is, 697.3 feet long IS one stadion.  Like one Astronomical Unit is, by definition, the distance from the Earth to the Moon. 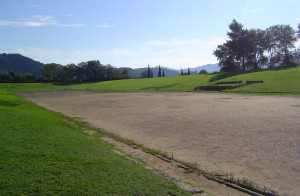 As Yianni had swept us to the site first thing in the morning, there were few other tourists about, and none at the stadion.  You enter through an arch, which is notable for being a true arch built by Greeks [the Romans are famous for their arches].  Ruined now, the arch would have led the athletes from the dark suddenly into the bright sun, which adoring fans cheering them on.  Sort of like today’s team entrances from the locker rooms. 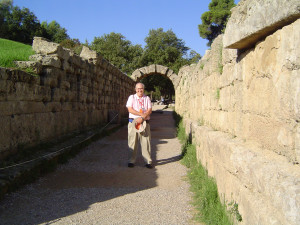 the arch would have been as long as the walls here
Ron lined up on the starting line and walked 3 steps. 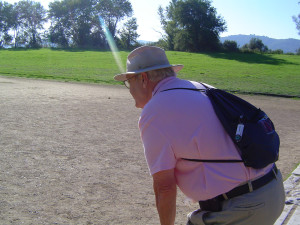 
At this stage, I began to develop my idea for the Criplympics.  Starting by feeling sorry for  myself, I had to slap myself to remember that I am so blessed to be able to move about at all; see, hear, smell, feel; breathe; and have the $$ to travel.  So, the Criplympics exists for all those who are handi-capable.  The sports include
·         One- or Two-Cane Slogging
o   walking over slick, rocky surfaces without sprawling
·         the Slow-motion Dash
o   climbing steps without handrails or ramps
·         the “Snap, Crackle, Pop” Knee March [sponsored by Kellogg’s]
o   scrambling all over museums without elevators
·         the All-Fours Hill Climb
·         the Broken Pavement Slalom
o   finding a way along cracked uneven sidewalks and roadsides

Unless you are a true sports fan, the site of Olympia just a bunch of ruined building foundations and the odd column.  We did find great interest in the nearly intact workshop of Phidias, preserved since it was used as a Christian church. 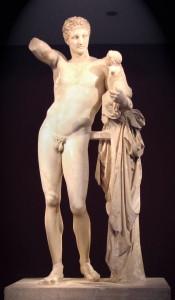 Hermes would likely be teasing the baby Dionysis with grapes

The Praxitiles “Hermes with the infant Dionysus” is rapturously beautiful and life-like; the Olympia pediments from the Temple of Zeus, featuring a fabulous Apollo from one end and a lordly Zeus from the other. 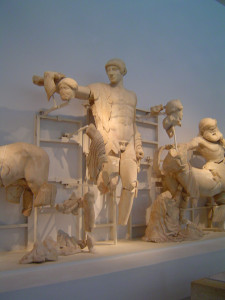 Apollo
The rest of the museum was marvelous al well, but what I remember the most after these, was the tools and equipment found in the workshop of Phidias mentioned above.  There were the molds he used to shape the gold and ivory for the clothes and skin respectively and a cup labeled “I belong to Phidias” on the bottom. 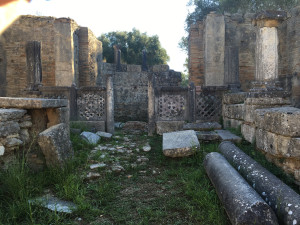 Then from the sublime to the ridiculous, we were driven to Cousin Vinny’s ¹ olive oil emporium with a demo of what to do with olive oil.  We skipped the demo and walked through the massive, rambling store, settling on a modest icon of St. Paul.  We were leisurely enjoyed refreshment on the front patio of the store, shaded by a wonderful climbing vine, watching a tiny 3” lizard, when our group emerged.

Yianni had arranged the most amazing lunch through Gate1 travel: we climbed a steep mountain to get to a village, named Koutsochera, clinging on the side.  [chera = village].  Gate1 was active in supporting the grade school for this village, which was about to close.  So the women of the village home-cook lunch for the busloads; we ate at long tables on a large veranda overlooking the steep streets of town, served fresh vegetables, meatballs, cheese and wine, all grown and made in the village.  The house has been fixed up for tourists—a very nicely appointed bathroom, for example—but a young family lives there.  The patriarch of this family made the wine from his own grapes, as well as the feta cheese.  For dessert, we were served traditional Spoon Sweet, a tiny serving of very sweet fruit preserve.  Leaving, we ran the gauntlet of aged ladies who helped cook, who beamed goodwill at us.  We were given leave to wander around a bit, so Ron and I found a tiny grocery/ post office / gossip center for drinks and tape for the road.  [btw, this tape was marginally better that I had bought in Eleusis.] 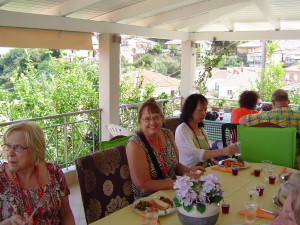 enjoying Spoon Sweet
Our feisty driver was able to turn the bus around, backing from one narrow village to street to another, and we careered through Koutsochera with millimeters to spare on either side.  A miss is as good as a mile, I always say.

Stupefied by the wonderful meal, even Ron and I fell asleep, rousing in plenty of time for the crossing of the privately funded bridge at Patras.  This crosses the Corinthian Gulf from Rio to Antirrio castles.  The bridge is the “longest fully suspended multi-span cable stayed” bridge in the world.  It is beautiful.  And the bus cost €65 to cross one way.  There are still ferries running across the gulf, costing half as much but taking probably an hour to cross. 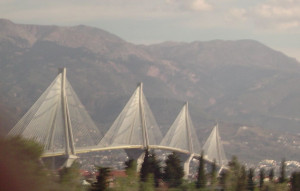 Chariaos Trikoupis Bridge
After crossing back to mainland Greece, we began to climb our way to Delphi.  From sea level, we twisted up to 1600’ altitude and centuries in attitude.  Skirting a natural harbor on the gulf, we passed through a veritable sea of olive trees, growing on the alluvial fan of the water that runs down the rugged cliff faces above and below Delphi.   We estimated 5 sq. miles of the frosted-sage trees.  Switchbacks led us up; we crossed and re-crossed an aqueduct [like the CA Aqueduct] carrying water—where?  We never found out.

And up our bus lumbered, with sheer drop-offs.  “Don’t look to the right!” says Yianni.  So, of course, we all did—and gasped.

I concluded that it would take days, even weeks for someone to climb up to Delphi from the harbor. 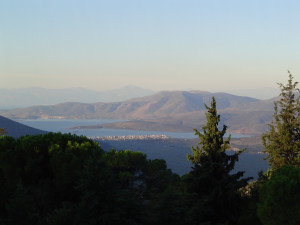 View from our Delphi hotel looking down the canyon to the dark blue olive forest to the small white town and light blue gulf.
People went to Delphi on pilgrimage to ask the Apollo’s oracle for knowledge of the future. The oracle only gave prophecy once a month and never in the winter.  Petitioners were lined up by rank and importance [and maybe cost of votaries] and the oracle could give only so many prophecies in a day.  If you were not lucky, you would stay in Delphi til the next month.   After the climb, I was convinced that you would seek the oracle only if the matter were of life or death import.  No poor folks could afford the time off work to go or the cost of waiting in town for a turn.  No women, or other slaves.  Truly matters of war and peace, statecraft or succession.

Having made the long journey, we pulled into our lodgings, ate a trough² dinner and fell into bed.  Matters of import must wait till tomorrow.

N4: 103, The Olympics, Greece Sept. 25th, 2016
1 Cousin Vinny’s: a stop on a bus tour that involves a store, often with a demo of what they make there and a long opportunity to purchase.  Always includes restrooms.
2 Trough: an all –you-can -eat buffet.  Always looks more delicious that it is.
3 CTC is Cheap Tourist  Crap.  It is not necessary inexpensive.  Often to be found in Cousin Vinny stores.  One must sort through and can sometimes find treasures.