Our first stop was the ruins of Akrotiri, a 3500 year old town, destroyed by the volcano that is Santorini.  Not the eruption that blew the entire center out of the island, as is popularly thought, but a much more modest one. The site was discovered by miners removing the light pumice to make concrete [the kind that sets under water].  After this find, mining was stopped.

This place is impossible to describe!  The buildings were 3 or more stories high and the tourist path runs around the top floor!  As at Pompeii, the archaeologists discovered hollows into which they poured plaster.  So far, all the casts were of furniture, trees but no bodies.  But tragedy always lurks and, the head archaeologist, Spiridon Marinatos, was killed when the roof protecting the site collapsed in 1974 [or he died of a stroke].   The site was closed for until a new massive roof was constructed, so we were incredibly fortunate to be there after the re-opening [in 2012].  They hadn’t even finished building the tourist shop, but had it under a temporary pavilion.  Other amenities were also being constructed, but this being Greece, who knows when they’ll be finished. 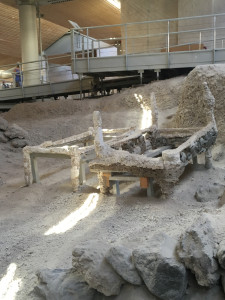 Bed frames discovered when plaster was poured into spaces in the pumice.
We were guided by a knowledgeable lady, who talked us all around the upper level and then down stairs to the ground floor of the main street of town.  And we walked on the actual street, with my hair literally standing on end with awe.  Actually, it wasn’t allowed to stand on end, as it might have damaged the walls, but I had some mighty goosebumps. 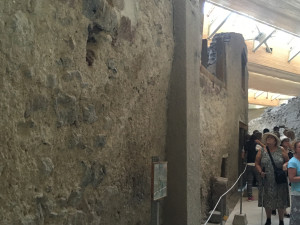 Street level in the Minoan town now called Akrotiri
We changed tour guides at this point and got an airheaded bimbo.  She was in a tearing hurry to get to Cousin Vinny’s winery.  But along the way, we stopped for lunch at Perissa, one of the black sand beaches, made of crumbled pumice.  I gathered some for my World Sand Collection, after eating a wonderful meal of moussaka with—wait for it—eggplant.  Because we ate at a place on the beach, we got to use the beach chairs and umbrellas, as well as the WCs.  I had worn my swimsuit under my clothes, but I found it too cold to swim and, after wading, I took off the suit to be more comfortable.  [but I put the clothes back on, never fear]. 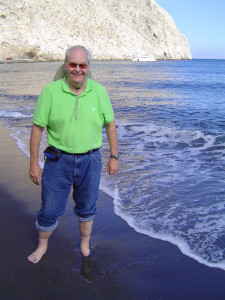 A great guy I met on the black sand beach at Perissa.
Next stop was Megalachori.  When our guide was telling us about the village, we told her we couldn’t hear her.  She was quite rude and set off at a brisk trot down the street.  We never did find out why we were there other than its charm.  I had to watch my step throughout, so I saw the pavement.  And the man who was an ardent photographer hung back with us, and Ron also got some scenic photos. 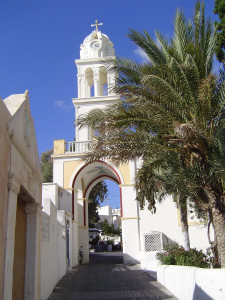 We then drove to the lofty parking lot of the monastery Profites Ilias [Prophet Elijah] for a 360 degree view of the island and the sea. Some intrepid souls climbed the 3,000,000 steps to the top of the highest peak on Santorini. 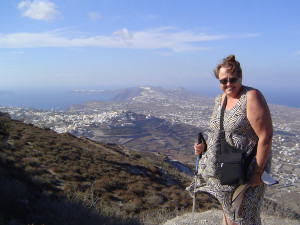 Windy Santorini
Mind you, we had 1 ½ hours at Cousin Vinny’s, tasting wine [I had a drink that tasted like Tang, with the other children].  Santos Winery had a big sign saying that they do “welding events.”  We wandered all over the parking lot and watched a welding event at a belvedere overhanging the cliff face.  The female welder wore a long white dress; it seemed like a hazard with all the sparks from her job.

Finally on our way again, we arrived at Oia [pronounced “EEE-aa.”]  Oia was named by National Geographic, or some such, as one of the 10 best places in the world to watch the sunset.  [The other 9 are in my backyard.]  People were swarming all over the old town, lining up, so many that the island began to tip toward the sea at the edge.  So we headed back away from the crowd and found an open-air cantina serving delicious food, and with a table right on the edge of the cliff.  We had a great view of the sunset, the caldera, boats in the caldera, while we had swordfish and eggplant.  A feral cat strolled by.  For dessert we had kataifi, which are nests of angel hair pasta, baked with pistachios and honey inside.  Mmmmmmm. 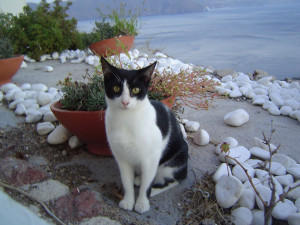 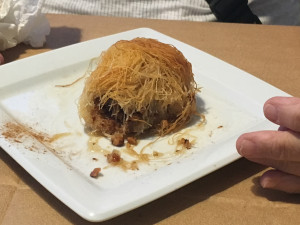 Santorini is justly famous for its white-washed homes and hotels, and blue domed churches.  For a wonderful view of it, watch the dream sequence in the Bollywood picture “Bang! Bang!”  Or stay tuned to this channel for our walking trip of the island. 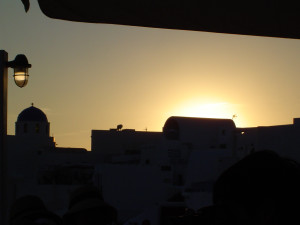