We were up at 5 am, eating “rusks” in the hotel lobby.  We thought they were dog biscuits at first, but they went down all right with coffee.  The hotel had packed take along boxes for us and, clutching these and shivering, we piled into the bus, well ahead of dawn.  All so that we could arrive at Hluhluwe National Park right at first light.  Hluhluwe is pronounced Shu-shu-we of course, sort of like the Phil Colllins song.

We piled into safari trucks that seated 10 and we were off. 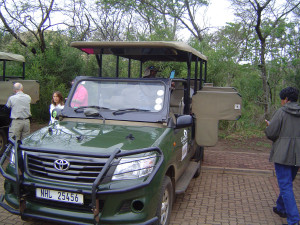 There were quite a number of private vehicles, so it was like a safari park tourist thing in the US.  [I look forward to going to one of these to compare.  And we did ride such a thing at Disney’s Animal Kingdom in FL.]  But this comparison did not diminish in any way the thrill and amazement of seeing this animals in the native bush country.

Here are the animals we saw: 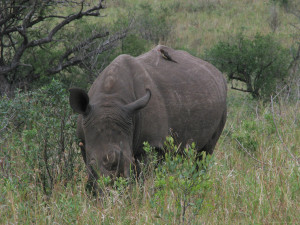 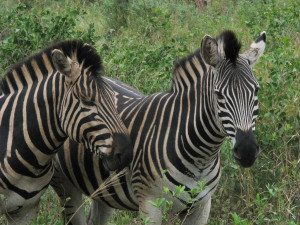 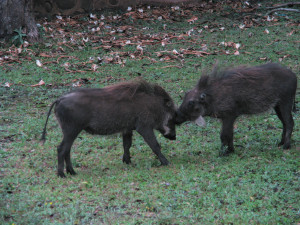 Sometime in all of this, we stopped for breakfast at Hilltop Camp, where the crew had made a lavish hot breakfast.  But we knew it was still “camp” food because there was merely instant coffee.  A vervet monkey was nearby, in case anyone dropped any crumbs; he ran across the tin roof to try to assure that would happen.  But, we were all too hungry to share. Monkey pic--- this is not actually the monkey, but that's the label that came up. 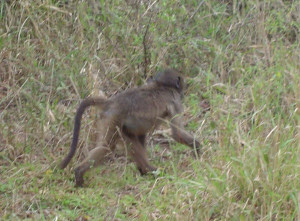 This is the vervet monkey

Finished at Hluhluwe, we piled back on our coach and snoozed a bit on the long drive to Swaziland.  A small kingdom, surrounded by South Africa, Swaziland hearkens back to tribal times.  Ruled by a king, no one has voting rights; every year there is a festival where the Swazi girls dance bare-breasted before the king.  He gets to choose one as a bride.  Yes, every year.  The Swazi flag features a lion to represent the king and a she elephant to represent his mother, who acts as Queen.  The black and white Swazi shield, lozenge-shaped, is on a field of red, with gold and blue stripes edging the red.  Adopted in 1967, the flag is all highly symbolic, with the gold literally meaning gold, which is the source of income for the Swazi.

We walked through customs, leaving South Africa and entering Swaziland.  This is taken very seriously, for you cannot get into SA if you do not have the proper stamps.  We noticed a large container on one of the desks full of free condoms.  Stuart [our guide] later told us that working girls hitch a ride with a trucker as he passes through the tiny country; and return with another going the other way.  Indeed, we saw a young [!] woman carefully counting out how many condoms she would need.  AIDS has taken a horrific toll in Africa, so it was actually a good thing to see her being careful. We stopped to eat our carry-along boxes for lunch at Nisela Camp, a sprawling Cousin Vinny’s where you can sit outside and have drinks brought to you.  There is a small Swazi village for rent for special occasions.  We watched as a group set up for a wedding.  Ron had Sibebe Premium Lager.  Ron now says, “It was wet.”  I believe that at the time, he said, “It tastes like American beer.  It’s good.”  But I didn’t write it down word for word.  Our carry-out boxes from the hotel were lavish and we had a lot let over for Stuart to take to his friends at the Candle Factory.

We conked out on the long drive to our next Cousin Vinny stop, the Swazi Candle Factory, much as we hated to miss the scenery.  From what we saw, Swaziland is wide open range country, with rustic, but not poverty stricken villages along a major, well-kept express way.  The King and Queen each have lavish palaces perched on low hills, approached by long, well-watered boulevards.

The Swazi Candle Factory is not at all what we expected, but a compound of shops selling very nice stuff, as well as CTC.  If you are interested, their brochure lists their address as—Malkerns Valley 26° 31’ 49” S 31° 11’ 60” E.  And <www.swazicandles.com>

What we bought was good quality, so we were glad to buy.  My favorite store was Yebo!, where I bought postcards that state, “Rabbits against fascism.”  Then we repaired to the diner, where we bought carrot cake to go, and then proceeded to eat it right then and there.  I personally wanted to have to go-box refilled, but wiser heads prevailed.

And another long drive.  For a tiny country, it did take all day to cross, what with border crossing and 2 Cousin Vinny’s.  Quite worn out, we ate in our room from our stash of cheese, crackers, dried fruit and cookies.  We watched the sun set on Sheba’s Breasts…which are mountains.  The tour guide says, “The distinctive twin peaks are clearly visible from the Malagwane Hill when traveling from Mbabane into the Ezulwini Valley.”  Be that as it may, we stayed at the Mountain Inn. 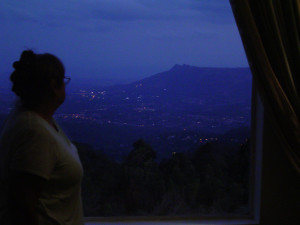 A little bit of Sheba

The inn has an open layout, with many rooms opening to the courtyards and others along cloister-like and balcony hallways.  Very charming, it was the kind of place you’d like to settle in for a week to do nothing.