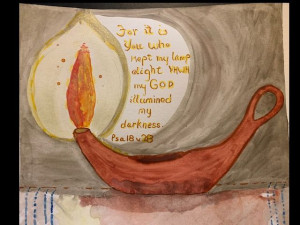 I. Translation
a. David’s, who spoke the words to this song to YHWH on the day YHWH rescued him from the clutch of all his enemies and from the hand of Saul.’ [p247]
b. Repeated antitheses of heights and depths.
II. Interpretation
a. The longest thanksgiving psalm; only Psa 78 and 119 are longer.
b. It is framed by couplets at the beinning and end that frame it.
c. In a nutshell
i. Mortal danger
1. 9 times the poem mentions enemies.
2. This is probably not truly David’s words, despite the parallel poem in II Sam. 22, but written for him [like presidential speeches], and probably during his lifetime.
3. It is both reflective and self-flattering; Goldingay thinks that David would not claim his heart was pure.
ii. David prayed
1. “I dedicate myself to You.”
2. Refers to God as a sheltering place in the wilderness [rocks, caves, crags], as well as a shield [military terms].
iii. God responded
1. 9 descriptions of God. Perhaps the phrase “You are my strength” v. 1 is better rendered “You are my strong one,” since all other descriptions are concrete terms.
2. God is here described in pagan terms. All of these allusions to the storm, clouds, rain and raining fire are used to describe Baal and other pagan sky gods. This similarity always makes me cringe a little, but I must assume it’s poetic.
iv. Delivered David
1. 11 times the poet mentions God sdaving.
2. Some of the terms are miraculous, such as the stories surrounding Moses; Deborah and Barak; etc.
3. “He saved me because He has delighted in me.” v.19
4. However, the implication is that God saved the psalmist because of the poet’s faith and integrity. This sounds more like court flattery than a poem by David himself.
v. Situation resolved
1. Refer to II Samuel 22 for the variant on this psalm.
2. There are many reflective verses on ways that God delivered him. Therefore, it is not a poem written at the time of the events, but toward the end of life.
vi. Closure
1. Confess God to all nations. This is the first time “all nations” appears in the psalms.
2. Make music for God
3. At the end, the third person reference to David and his descendants show that David probably did not write this himself.
III. Theological Implications
a. The psalm does not refer to salvation in the End Times [not eschatological].
b. It in no way refers to Jesus or His bringing of salvation [It is not Messianic nor Christological.]
c. Rather, it is “an expression of gratitude for something God has done for a military leader of Israel.” [p.253].
d. There is no doubt that God has aided David militarily, not spiritually. Christians must wrestle with the God of the Old Testament. [and do not forget that “Israel” means “he wrestle with God.”]
e. Ref. Romans 13:4